10. SWEVEN, “The Eternal Resonance” (Ván): The untimely demise of Morbus Chron was a gut punch, as they had just gotten started showing how imaginative and expansive death metal can be when they called it quits after 2014’s landmark “Sweven,” their second record. Six years later, MC’s driving creative force, guitarist/vocalist Robert Andersson, regrouped, named his new band after world-toppling record, and released “The Eternal Resonance,” this project’s first record and one that nobly continues that mission but takes it even further than before. It really ices the blow of losing Morbus Chron because Sweven feel like having them back in spirit.

“The Spark” is the instrumental opener that has clean guitars fluttering before the pace steps up, going into a progressive plunge that pushes into “By Virtue of a Promise,” a 9:21 cut that trickles slowly before things flow eerily into anguish before Andersson’s wails jar. “Reduced to an Ember” has a jazzy start that chills the flesh before the tempo is shredded apart, and riffs spiral into a cascading section that bleeds imagination. Rough wails and exploratory guitars combine and create a chaotic feel before keys and acoustics buff the edges. “Mycelia” plays tricks with your mind, as hand drumming paces, and grim howls fan the flames. The tempo picks up and stomps bones as the vocals rip down your neck, and the playing keeps adding intensity. “Sanctum Sanctorum” closes the record by entering slowly, creating an ambiance before the guts are torn out. The track starts racing hard, making your adrenaline gush before it settles in the clouds and appears ready to drift away. I cannot wait to hear where this band travels from here, as I’m along for the entire ride. (March 20) 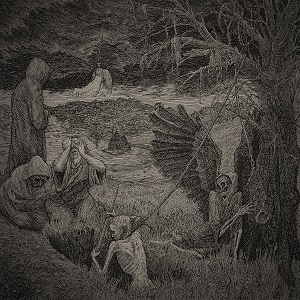 9. MSW, “Obliviosus” (Gilead Media): The world is suffering right now from a horrible virus that has impacted our everyday lives (even the assholes who refuse to admit this is real), but at some point this will end. But there are other problems that exist that won’t be able to be expunged by a jab in the arm and can’t be avoided with distancing and mask wearing. MSW, the mastermind of doom smashers Hell, tackled one of those head on with his solo debut “Obliviosus,” an album that was inspired by his brother’s addiction problems. The scars are evident, the pain bleeds through these four songs, and your heart just has to go out to him and his family as they navigate this darkness.

“O Brother” starts with guitars clashing and doom falling as sorrowful guitars bleed into the night. Carli McNutt’s vocals immediately haunt as she calls out before the ground breaks, and MSW’s shrieks penetrate. The tempo chugs hard as McNutt’s singing swirls in air, while the playing begins to punish hard. “I will never forgive you,” MSW wails painfully while an angelic haze drops, and guitars rain down like ice daggers. “Funus” is an instrumental bridge that immerses itself in darkness and piano drips like a cold rain, and the strings scrape in and later flood into full body. The title track ends the record and starts with guitars agitating before a doomy storm laps shores, and the leads light up the sky. Strings flood as wordless calls connect, while the music feels like it’s floating along on a clean tide. About 10 minutes into this 19:40-long cut, MSW’s first shrieks tear open as the bass clobbers and the guitars rush. A gazey caterwaul brings added pressure, pounding away as it gusts, as MSW jolts, “Our family destroyed, dragging your fists through the open void, where are you, my brother?” Indescribable pain aside, this is such an immersive, incredible record that is some of MSW’s best work. (July 3)

For more on the band, go here: https://loweryourhead.bandcamp.com/

For more on the label, go here: https://gileadmedia.net/

8. SPIRIT ADRIFT, “Enlightened in Eternity” (20 Buck Spin): It should be no secret that Spirit Adrift are a favorite at this site and have been ever since they arrived four years ago. Nate Garrett and Marcus Bryant have remained busy as they pick up praise along the way and have created some of the best records in all of metal, and that continues on their fourth LP “Enlightened in Eternity,” one of the best sounding and most lively of their stellar run. As luck would have it, the songs were designed to be a positive, uplifting experience, and they succeed at that goal, but tragedy struck both members of the band since with the passing of each of their beloved dogs, who you can see galloping gloriously on the album’s cover art.

“Ride Into the Light” starts the record with the riffs killing and hugely chugging as everything comes to life. “If we make it through the night, we’ll ride into the light,” Garrett declares over the chorus as the track charges, and the soloing catches fire. “Cosmic Conquest” has the bass driving up your blood pressure and more great leads that make your heart surge. Guitars flex before the soloing adds more fire, hitting glorious highs that’ll have your serotonin levels cruising. “Battle High” opens with a bass line that reminds of “Black Velvet,” as everything snakes in around that, with Garrett warning, “Save yourself, war is hell.” The chorus gushes through the center of its rigid body while the music is charred and leaves pockets of smoke behind. Reunited in the Void” is the 10:48-long closer that dawns over the horizon as the guitars lather, and a slower pace is achieved. “Pain is just an inner guide, voices from the other side,” Garrett wails as synth rises, and the emotional toll gets heavier, “you and I will be one eternally.” Spirit Adrift are one of the best bands in any metallic sub-genre, and even bigger things surely are in their future. (Oct. 16)

For more on the band, go here: https://www.facebook.com/SpiritAdrift 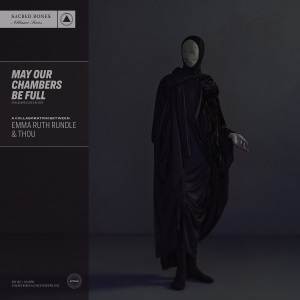 7. THOU/EMMA RUTH RUNDLE, “May Our Chambers Be Full” (Sacred Bones): When it comes to dream unions, it’s hard to think of anything more satisfying than putting together doom maulers Thou with bloody-heart-smeared-on-sleeve artist Emma Ruth Rundle. Yet, that doesn’t necessarily mean them making music together was going to be an automatic sure thing, but their first collaboration “May Our Chambers Be Full” alleviated any worries that came along with the idea. This record is so good and so satisfying that it’s hard to put into words, but we’re hoping this is just the first of a fruitful artistic endeavor together (Spoiler! There’s a new EP coming in January!)

Rundle takes the bulk of the lead vocals, with Bryan Funck playing a lot in the background and helping enhance the edges, though KC Stafford also gets a chance to drive, which is always a good choice. “Killing Floor” starts with guitars rising from ashes before the track bursts open, and Rundle’s voice leads the way. Funck plays more of a back-up role here as his growls complement the singing, while the chorus trudges on, and Rundle calls, “Move your body from this place.” “Monolith” is crushing and clobbering from the start as Stafford takes lead, adding their dusky tones to the mix. The pressure keeps building as Stafford’s singing swelters, with the back end picking up filth, and the track mauling on its way out. “Magickal Cost” starts rusty and like something that crawls out of the evening dusk, a track that wouldn’t sound out of place on one of Rundle’s solo albums. Guitars echo and moan as the sun sets and splashes oranges and purples across the sky, and then the ugliness rears its head as Funck digs into the center. “The Valley” ends the album, and it’s a monumental track, an 8:58-long rush of emotion that makes your heart cry out. Strings swell as Rundle’s singing slithers into the murk as she calls, “The fear of giving up is in the valley.” This record is an utter triumph, dark, heavy, vulnerable, and massive to the end. (Oct. 30)

For more on Thou, go here: http://noladiy.org/thou.html

For more on the label, go here: https://www.sacredbonesrecords.com/

6. INEXORUM, “Moonlit Navigation” (Gilead Media): Without going into too much detail, it’s been a very dark and depressing year for me, and finding things that truly make me feel good, especially recently, has not been terribly easy to come by. It is what it is. Anyway, one thing that has managed to lift my spirits has been “Moonlit Navigation,” the second album from Minneapolis-based Inexorum, an eight-track, 42-minute exercise in supreme melodic riffing and positive energy. Yeah, yeah, black metal is supposed to be grim, but I don’t remember reading a rule book on the style, and Carl Skildum (guitars/vocals) and Matthew Kirkwold (bass/vocals) refuse to adhere to that standard.

“Ouroboric State” gets things off to a rousing start as the drums come to life, and the riffs start cutting down their path. Right away you get a sense of what’s to come, that being huge riffs and vocals that wrench at you, as the leads blast through, and a sense of delirium strikes. “Dream and Memory” is a massive deluge out front, with punishing roars and a mass of energy creating a great force. The drums decimate bones as a charge jolts your chest, making your blood rush, before the tempo calms and melds into the fog. “Signal Fires” lands punches as everything lights up, while the playing destroys everything in sight. The growls have an added conviction as they jar your ribcage, while the drumming once again rocks your insides. The chorus is powerful as hell, while the back ends trudges before becoming breezy, and all the elements blend into dusk. Closer “In Desperate Times” inflicts damage with a rage of riffs, melodic growls, and razor-sharp guitars that work their magic as Skildum laments “when all is lost and nothing’s left to save.” That isn’t a sign of submission as the battle continues, and a blistering chorus does its best to get you going. I’m not exactly overflowing with positivity right now, but this record always reminds me to refuse to quit and to find the power I have hiding somewhere within me. (June 26)

For more on the band, go here: https://www.facebook.com/inexorum/

For more on the label, go here: https://gileadmedia.net/