We’re probably all a little tired of wallowing in terror and darkness and hopelessness for an entire lifetime after the past 12 months, but metal doesn’t abide by ordinary laws and ideas, and the genre is going to force-feed us pain and misery as long as it’s around. But at least when it comes to metal, it isn’t going to give us a lethal pathogen. It’ll just beat the shit out of us psychologically.

We say that as Aberration’s debut self-titled EP is about to be in our laps, and it’s nasty and pounding and feels like hell slowly creeping across the earth. It’s but three tracks long, but the weight of this thing and the way it mashes the planet is not just something you can shake. Your best bet is to strap in and go along for the ride as the band—guitarist/vocalist JH (also of Void Rot), bassist/vocalist DH (also of Suffering Hour), guitarist AW (of Nothingness), and drummer EC (of Tvaer)—rumbles across the earth, crossing the streams of death metal, doom, sludge, and black metal into a sickening cauldron that, if we’re being honest, kind of smells awful. But the music is fucking killer. 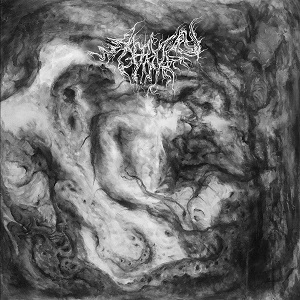 “I” burns into the picture as the track begins to rumble, and the growls bring menace. Infernal hell erupts as the pace scrapes along, collecting flesh behind it, and the guitars begin to boil and give off wilting heat. The playing then gets gazey as it lets loose, letting fires rage as the band clobbers with force, beating you down until everything bleeds into dust. “II” keeps the tempo trudging as furnace-style heat burns your face, and the low end absolutely pummels. Growls hiss as the playing drills into the earth, building to a violent crescendo that eventually combusts. “III” ends things in a wave of total violence that unloads as nasty doom works its way into the mix. The guitars gain momentum as hell is unleashed, and monstrous growls wrestle you into the dirt. Atmospheric leads erupt and spread through your bloodstream as the battering continues until they finally grant you submission.

Aberration’s initial slice cut into this world is a deadly one, seemingly promising that things only will get meaner and heavier as they progress into their full creative realization. This self-titled first EP is just a taste of what this band can do when having their way with death and black metal, as well as doom, and it’s a frightening storm of power that’s contained here. This is a great start, and I can only imagine what’s coming from them next.

For more on the band, go here: https://www.facebook.com/Aberrationdeath

For more on the label, go here: http://sentientruin.com/