Two things happened this week that are a rarity for me. First, I experienced an earthquake and second, I had to plan an early vacation evacuation because of a hurricane. As a resident of Pittsburgh, about the worst we get is your occasional microburst, a vicious thunderstorm or, in the winter, a torrential snowfall. But earthquakes? Unheard of. Hurricanes? Are you kidding?

But I’m not at home this week. I’m on a vacation at the beach with my wife, and typically when we come here, it’s ridiculously serene. But you can’t control or predict nature. Honestly, the earthquake was pretty cool. It wasn’t very bad at all where we are, and it just felt like the land was swaying back and forth a bit. It helped that one was seriously hurt. Maybe this is odd and maybe it isn’t, but when the quake hit, I was listening to the latest Earth album “Angels of Darkness, Demons of Light 1,” and specifically the song “Descent to the Zenith.” It was a coincidence, I guess, and a pretty weird one. But it just happened that way, and if I had to decide what I wanted to hear during an earthquake, I’m not sure I’d pick that album. In fact, I don’t know what I’d choose to have in my ears if I knew the ground was about to rumble.

But this got me to thinking. Since we’re going to have to ride ahead of Hurricane Irene in order to get home, what would I want to have on in the car if, somehow, the whole thing caught up to us? What record would either fill me with the adrenaline to go on or would scare the hell out of me enough that the rain, wind and chaos wouldn’t seem nearly as tumultuous? This wasn’t an easy one. I also reserve the right to totally change my mind at any time, because who knows how I’d feel if this was coming down on top of us? Anyway, here are a few things I came up with that I imagine may help quell my liquefied guts if Irene gets her hands on me. By the way, “Rock Me Like a Hurricane” is not going to be on the list. I already thought of that joke. 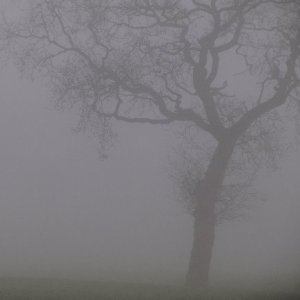 OK, first and foremost, I’d go with Jesu’s 2006 EP “Silver,” almost entirely because of the album cover. For some reason, that cover always makes me think of impending doom and destruction at the hands of nature, simply because of how gray it is and how in-the-track-of-hell that tree appears to be. That’s just my interpretation of the artwork, and maybe you see something different. The songs are diametrically opposed to damage. The music itself is a bit poppier and easier than what Justin Broadrick had drummed up to that point, though since that time, he’s certainly gone back to this type of thing far more often. But I always really loved this record and have listened to it during storms when I’ve been stuck in my own living room.

Another good one would be last year’s triumph by Agalloch called “Marrow of the Spirit.” The

band, and especially its leader John Haughm, always has been heavily in touch with nature, and certainly this album is no different. Agalloch always find a way not only to convey the beauty and serenity of our surroundings but they also manage to get across the inescapable fact that we are at its mercy. We can’t stop a storm or an earthquake or a tornado, as much as we’d like to, and all we can do is take cover and hope for the best. This is a record that I played all last winter, especially when the snow was at its heaviest, and it also works just as well during a downpour. Funny enough, I brought my Agalloch hoodie with me in the event of heavy rains, so I use it to protect me from the elements. It’s my umbrella.

Finally, I’d go with the Iron Maiden classic “Seventh Son of a Seventh Son.” I’m sure you’re wondering why. I’m certain there are others who wonder why I want to hear it in the first place, because it’s a fairly polarizing record. But this is an album I listened to non-stop during the summer of 1988, and I remember more than one day when I was stuck inside because of the elements, and I spent my time staring at this album cover and reading back the lyrics. Yeah, it’s more of a frosty cover, with Eddie floating along in what looks like a pretty icy body of water, but it also makes me think of flooding and what leads to that state. It’s always been a really stormy album for me, one that’s always been a go-to record at times when Mother Nature curbed my plans to be outside.

So these are just a few. Do you have any that you’d choose to hear if a hurricane was working its way toward your home? Let us know in the comments. Be safe, East Coasters.

One thought on “Hurricane hell vs. metal”