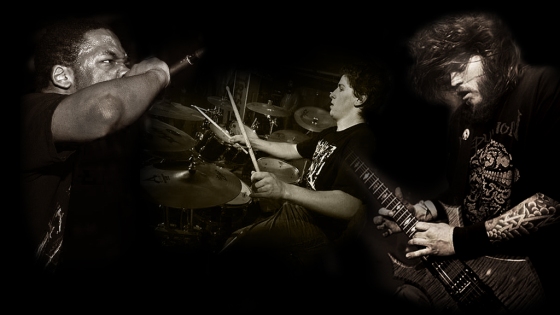 I am convinced Eric Hersemann has been to outer space. In fact, he may have come from there. Well, maybe we all have. You know those theories are out there. But really, Hersemann is from there, and I think he arrived on Earth fairly recently to enrapture us all in his brand of psychedelically warped death metal destruction.

In case you don’t know who I’m talking about, he’s the brain and driving force behind Gigan, one of the most destructive and bizarre bands in the entire metal world and one that certainly stands on its own artistic merits. Their music, with Hersemann at the helm since its 2006 inception, has grown over the years and has become a larger, more violent beast as it’s gained more momentum and the fire in its belly has flared to insane levels. In 2011, their second full-length album “Quasi-Hallucinogenic Sonic Landscapes” brought Gigan and its members to their greatest level yet, and the record was just a mind-blowing, face-melting assault that sounded like nothing else in the death metal world. Now, two years later, Gigan are back for more with their third album “Multi-Dimensional Fractal-Sorcery and Super Science.” Go ahead and take a few minutes to memorize that mouthful of a title.

Hersemann remains the main beast behind this band, taking care of songwriting duties and playing some of the most bizarre guitar you’ll ever hear (and he’s left-handed!), as well as bass, and other instruments that make the swarm of sound. Joining him on this record are drummer Nate Cotton and new vocalist Eston Browne (who replaces the mighty John Collett, who was a force on their last record). The new guys had their work cut out for the to immerse themselves in this weird cosmos but have done a hell of a job proving their worth. The eight cuts stretched over about 45 minutes are as insane, dizzying, and baffling as ever before, and their assault on this record comes from all over the place, leaving you no time to prepare for it all.

“Beneath the Seas of Tranquility” is a boiling yet crunchy opener that gets the madness kicked off in earnest, as strange melodies build up and are blow away, and Browne’s growls even get some alien treatment that sounds like they are blown through a poisonous cloud. Toward the end of the cut, the band delves into a section that’s damn near grindcore as they peel off techy devastation. “Influence Through Ritualistic Projection” has cartoon-like guitar playing, like it could soundtrack a zany Tom vs. Jerry battle, but then the cut gets harsh and destructive, with piercing guitar strikes that shoot out of the darkness, and vocals that sound infernal. “Electro-Stimulated Hallucinatory Response” sounds like what Primus might have if they had gone straight death metal, as it’s loopy and crazy, with more alien vocals and guitars that buzz like a swarm of winged insects you’ve never seen before. “Mother of Toads,” one of the most normal song titles on the whole damn record, is mind boggling and mega speedy, with warped weirdness, guitars that seem to blast out of every corner of the song, and trippy, spacey wonder.

“Obsidian Sun” opens with a flurry of guitars, and it settles into a thrashy, compelling composition that’s captivating and should hold your interest as the band pounds away. “Cosmic Triangular Communications” has all of the moving parts pulsating and sending out violent energy, and it’s the one song that most resembles what Gigan accomplished on the last record. In fact, it feels a bit like a bridge between the two albums. “Gibbering Hordes of Zemiath” goes back to those swarms I mentioned earlier, as this calculating, penetrating cut makes it sound like those creatures are back for another attack, and the bizarre screaming and screeching heard at the end very well may be their battle cries. It’s creepy. Closer “Bio-Engineered Molecular Abnormalities” is a thick, bubbling cauldron of horror, with the band again going back to dust off their grindcore tendencies. The drums are just devastating and relentless, and the rest of the song sounds like it’s blasting off to go back into space to fuel up on more toxins and troops to make their next assault even more obliterating.

“Multi-Dimensional Fractal-Sorcery and Super Science” sure is a crazy-ass development for Gigan, and if your mind was fried on their previous records, you’ll be as shaken and stirred mentally on this one. I prefer “Quasi-Hallucinogenic” over this record, as it felt more immediate and intoxicating to me, and it also happened to be one of my favorite records of 2011. But I certainly like this one, too, and like any of Gigan’s work, it takes some time for their music to really bust through your cells and get into your blood. Hard to say if this will be the same form of Gigan that attacks us next time around, but you can be sure Hersemann will be commandeering the ship with more death metal that doesn’t sound even remotely human.

For more on the band, go here: https://www.facebook.com/Giganmusic

For more on the label. go here: http://www.willowtip.com/home.aspx