What do you do when two of the most ambitious, prolific bands in underground music get together for a collaborative project that not only fills in the gaps of the late-year down cycle of music releases but also promises to be one of the most electric, bizarre, and mind-erasing projects of the year? You get out of the way and let them do their thing.

Finnish rockers Circle, who have not met a genre of music in which they’re disinterested in dabbling (except, maybe, hardcore rap), seem to constantly have something new ready to go into circulation. Hell, we’re going to talk about another new album from them in the upcoming weeks, and yes, it totally delivers. They never seem to rest, and their constantly moving frontman Jussi Lehtisalo probably never sleeps due to other musical projects (can we please hail last year’s criminally underappreciated Split Cranium?) as well as his label Ektro Records. On the other hand, Mamiffer have been in fairly high gear as well, touring, putting out their own music and others’ via their label Sigr, and also making noise with like-minded artists such as Locrian and Pyramids. They are comprised of Faith Coloccia (Everlovely Lightningheart) and Aaron Turner (ISIS, Old Man Gloom, Twilight, etc.) and have carved their own niche of atmospheric, woodsy, dreamy doom and ambient rock that is both haunting and lovely. You can imagine how these two groups together might sound like.

Well, imagine no longer. The groups joined forces for their new collaborative effort “Enharmonic Intervals,” a seven-track collection recorded in a single day at Keski-Porin Kirkko, a 19th century stone church in Finland, where they two bands explored every crevice of the structure. No wonder these songs sound so liturgical yet chillingly haunting, and the presence of the venue’s Paschen organ adds yet another spacious element to the proceedings. 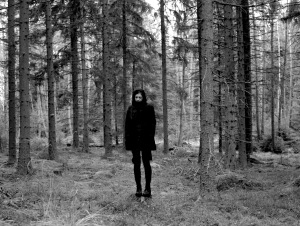 Oh, but back to what it would be like if these two bands got together. If you’re familiar with each band, or even just one of them, forget what you know about them. There are no grisly riffs, there are minimal doom storms, and very little chaos of any kind, and the attitude is instead reflective and thought provoking. The music lends itself more toward Mamiffer’s side of the spectrum–that’s only sonically and not philosophically–but they and Circle show two groups of artists can work on a project and offer ample room for everyone to create something special and unique. That’s what this record is, and with winter approaching here in North America, this will sound perfectly placed against sheets of falling snow (just look at the cover!).

“Kaksonen I” opens with a cloud of noise drone, squeals, and shrieks that certainly pull open your eyelids, and then vicious howls and shouts, hanging in mid air, rise like a threat. Horns bawl, and a Middle Eastern-style, foggy melody rises up to carry home this song. “Parting of Bodies” does have a dose of menace at the start, with dark rumbling settling in and blackening skies, and Turner’s vicious wails erupt in the background. The song eventually turns toward dissonant, airy melodies, but just as you’re feeling calm the thorns return, ending the track in emotional fright. “Vaso Luna” begins with a cool set of keys and noise that pulsates, while Lehtisalo warbles and chants in tongues in the background, almost as if he’s in a hallucinatory trance. Synth is smeared all over, while proggy progressions break out, and the mood is decidedly dark and weird. “Tumulus” is cloudy and has an attic sci-fi film sense to it, with Coloccia calling wordlessly along with the melodies that give an early morning, dew-soaked feel to it. Psychedelic-rich guitars later introduce themselves, leaving the track in an eerie haze.

“Vessel Full of Worms” sounds gross and unsettling just from its title, and yeah, it’s a little unsettling at times. Horror-style drone starts to gain ground, though it’s balanced out by warm organs and the sense of a spiritual service about to hit its high point. Keys stab here and there, adding an element of drama and suspense, and a spooky sense of dread and terror strikes directly at your heart. “Mätäneminem” is the most bizarre of all of the songs, reminding at times of Scott Walker at his most mentally unhinged. Operatic cries erupt from Mika Rättö, who lets loose and fills the air with his strange, warbling voice, and the keys drizzle a heavy glaze over everything. In fact, the song reminds me of something you might hear over an old Italian vampire movies, which gives a vintage and disgustingly classy feel. It’s really an awesome thing to behold. Closer “Kaksonen 2 (Artemesia)” closes the album in much the same way its adjoined opener starts the piece. Noises splinter and shake, siren-like cries splash across the background, and weird, chant-like vocals lurch and rip open your guts. The whole song feels like a ritual taking place deep in an underground cave, where the incantations are left in the air for its intended spirits to absorb once they find their way to such place of reverence.

While Mamiffer’s and Circle’s members have made plenty of metallic goodness over the years in their many projects, this record is much different than their back catalogs and will find favor among listeners who could use a chance to relax and concentrate amid all the brutality in their lives. This is a fruitful, stunning, true collaboration among artists whose respect for each other is clear by how they play together. They blend into a true whole, making “Enharmonic Intervals” a fantastic mood record and hopefully the first of many partnerships between these two bands.

For more on the label, go here: http://sigerecords.blogspot.fi/