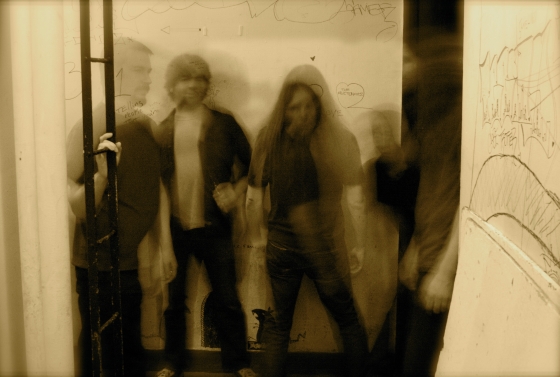 Have you ever been in one of those moods or situations where you don’t think you can endure anymore punishment or poor results or bad luck? Where your face is against the wall, and all of the pressure and force of life mashes and suffocates you, sending you into a spiral of panic. Do you often feel that you need someone to understand your explosive psychosis?

Luckily for you, Alan Dubin does. You probably know him from one of his most infamous projects Khanate, one of the most terrifying, deranged bands of the past decade. Now here with Gnaw, he’s able to take his, uh, gift, and smear it over this industrial-spiked doom that might even be more uncomfortable. Dubin’s vocals definitely are not for everyone. They may be for the very few who truly identify with the chaos and filth that char his mind and soul. He sounds like a man on the edge. Meaning the edge of a cliff or the cusp of a potentially violent mental breakdown, and he cannot control the voices spewing from his mouth. You hear his anger, disillusionment, and mental decay without a filter, and it’s a sobering and frightening display.

This isn’t to assume Dubin is the only highlight of Gnaw. He is surrounded by a cast that complements his fury and create sounds as corrosive as as his words, and on the band’s second full-length “Horrible Chamber” (perfect title, by the way), they’re at their very finest. The rest of the band is comprised of Carter Thornton (guitars, bass, other sounds), Brian Beatrice (guitars, bass), Jun Mizumachi (electronics), and Eric Neuser (drums, percussion), and they’re a total force to hammer home the damaged psyche swirling in Dubin’s brain. The band mixes abrasive noise, drone, doom, and metallic swagger on seven songs that’ll damage and burn you.

The record opens with “Humming,” a crazed, chillingly bizarre piece where the madness is allowed to erupt early and dramatically. Dubin howls, “Humming inside!” as if he’s providing a running commentary to something churning in his mind that he can’t turn off or quell, and the band supports him with fiery noise and creepy piano. “Of Embers” kicks your ass, with a swaggering bluesy doom mix smooshed with scarred buzzing, and it’s a solid example of how the band knows how to do more than just make strange sounds. “Water Rite” stretches over seven minutes and often feels like a giant factory pumping out clouds of black industrial smoke, and Dubin’s voices is treated with a mechanical effect that makes him sound even more alien than he does otherwise. There are weird stabs of melodic singing at times, bizarre rants, and stuff that reminds of Faith No More’s more molten moments. “Worm” has a tasty, pulverizing thrash riff that holds the track together, and Dubin manages to melt down even further, shrieking, “I’m the worm,” and ranting about insignificance while his doom is on full display.

“Widowkeeper” opens like a face-melting furnace, with noise and trauma, and strange eerie whispering leaves you uneasy, making you vulnerable for when the hammer drops and the song detonates. The track is black and bleak, the noise could leave you as unhinged as Dubin’s words, and the song results in a total mind eraser. “Vulture” is one of the faster songs in Gnaw’s canon, as noise and sludge muddy their path and the bluesy soloing that meets up with the filth gives the song a ballsy feel. Dubin manages to top himself yet again on this one, howling, “If only I could stand,” which could mean a million different things, but you know whatever it is that it isn’t good. Closer “This Horrible Chamber” is 12 minutes of pure audio torture (in a good way), that is full of ambient hiss, strange blips, maniacal sizzling, and Dubin disintegrating, wailing about dreams going unfulfilled, warning listeners that, “This is where you end up,” and begging, “I want out.” It’s slurry and horrific, and it should only leave you feeling darker and more hopeless.

So yeah, sadly I totally relate to what’s going on with “Horrible Chamber,” because it hasn’t been a banner year for me, especially the past few weeks. But I had Gnaw to lean on, and I knew when the record was over that I could rely on this band to provide an escape where I can dump my madness and relate to others who sound like they’re dangling off the edge. Gnaw might annoy some people, make others feel uncomfortable, piss off others. But you’re going to feel something when you hear Gnaw, and you’re going to react. And if you’re like me and want to immerse yourself in every sick sound on this record, you’ll find a document that you’ll feel like is reading and then interpreting what’s in your head.

For more on the band, go here: https://www.facebook.com/Gnawtheband

For more on the label go here: http://www.seventhrule.com/