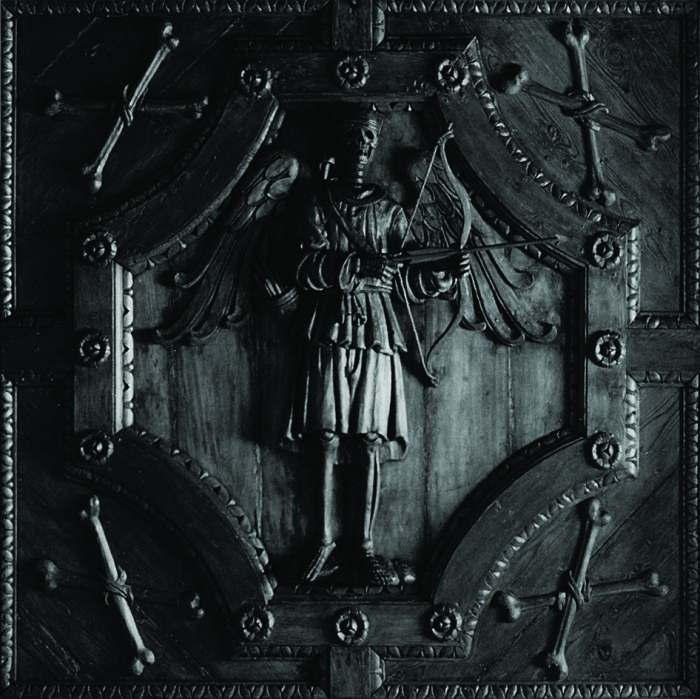 Dark forces have had a huge part of metal ever since the dawn of time, and the element of danger taking over the world and swallowing humanity always has been there as a threat thematically. At the same time, that thread might seem a little tiresome, but when the tale is told right, it still can be as compelling as anything.

New York-based black metal band Funereal Presence nail the whole thing on their debut full-length “The Archer Takes Aim,” a record that is as spooky and haunting as it is devastating and moltenly heavy. Led by sole creator Bestial Devotion (who also plays drums for the mighty Negative Plane), this band is one of the most interesting going in U.S. black metal and in the sub-genre the world over. The fact there is one man behind this whole thing is stunning, because this record is wholly realized like it had a handful of artists involved. There is so much going on here, and it is woven together seamlessly, that you can’t help but get totally hooked and sink into the dark violence lurking beneath everything. This is one of the most original-sounding metal albums I’ve heard so far this year, and I can’t stop listening to the thing, just trying to get a grasp on what’s going on. That doesn’t happen nearly enough these days.

If you go through the lyrics, you get a dark, threatening tale of the great beasts rising up, trying to choke out all light. In a way, it feels like a Biblical-style tale the way the story is told, and it has a feeling like what’s going on here not only threatens all humanity but the entire universe. There is a poison lurking that is seeking any vein that will accept its black tar, and if it has to infect by force, it will do so. It’s a terrifying display, one that could have you quaking inside, and this record gets over the idea better than any number of movies and television shows have tried to do and failed. It’s a charred display, and it’s not just a black metal opus. There are gothy, post-punk undertones present, as well as processional passages that might make you feel like you’re witnessing a mass burial in the face of black death.

The record opens with 12:29 “The Tower Falls,” a doomy, elegant number that sprawls out before it hits a devastating pace. The vocals are charred and chaotic, and death bells ring out on a consistent basis, always reminding you that death is right around the corner. There is some clean singing that reminds a bit of Ian Astbury, feeling dark and morbid, and the song keeps churning, making like a perfect soundtrack to a dark, ominous thunderstorm that soaks the earth. The song delves back into clean, murky territory before it charges back up again for one final assault. The 12:47-long title track follows, with huge, infernal organs breathing black smoke into the room, and the song blowing open with a great fury. There are strong guitar leads, galloping that has a NWOBHM feel to it, and savage, thunderous playing that is threatening and bold. More clean singing is worked into the mix, giving the song goth-fueled texture, and eventually the fierce tempo re-emerges and keeps the pace matching the menacing, calculating storyline, with a final howl of, “And the fall comes hard, down below into fires.”

The instrumental “Dammerlicht” is up next, which acts a perfect bridge from the title track to the epic conclusion that wraps it all up. More bells chime, a classic metal feel is infused back into the proceedings, and a full assault is launched onto your senses. The pace goes back and forth, letting this rise, subside, and boil over again, with the final moments absolutely exploding. That all sets the stage for the 16:19-long closer “Gestalt des Endes,” with guitars spilling out, the vocals sounding like they’re filtered through coal, and later some clean singing coming back to darken everything. Swirling melodies emerge and add a new element into the song, and more classic guitar work is infused to keep the charge moving forward. Once again, the tempos rise and fall, bringing you through various steps of drama, and the final fury-filled moments let the fires reach their highest point, strangling you with smoke and delivering a final blow designed to let the dark forces take hold and choke the world to death. It would be beautiful, actually, if the tyranny and violence wasn’t so thick and omnipresent.

Funereal Presence have a take on black metal all their own, and “The Archer Takes Aim” is one of the most interesting releases of the year so far. The record gives you plenty, always keeps you engaged, and continually feeds you morbid reminders that the world could be swallowed by dark forces at any moment, be that of a beastly or human variety. This album will envelop you in madness in a way few could, and the stories lurking here should keep you terrified and uncertain of your fate for hours on end.

For more on the band, go here: http://www.last.fm/music/Funereal+Presence

For more on the label, go here: http://www.theajnaoffensive.com/