Watching this current presidential campaign, it’s not inconceivable we’ll all be dead in a few years. If not dead, at least living in ruin and wondering what the hell went on the past decade or so. How did we get here? How will we climb out? WILL we climb out?

All of those morbid visions hit home on “Eternal Downfall,” the debut record from Oakland, Ca., D-beat/crust/black/death amalgamation Atrament who waste no time getting their Apocalyptic visions out front on these quaking, smothering 11 tracks. Here, the band imagines a world in which humanity is a hindrance and not a primary commodity, and that fallout from radioactive annihilation chokes out whatever is left and breathing. Really, how does that seem too far fetched considering what people are doing in these primary elections? Holy fuck, this could happen. Will Atrament bask in the fact that they were right all along? Not likely as it doesn’t appear many would survive such an onslaught. So they’d be more prophets of death rather than gloating soothsayers, and with that in mind, it’s not too late to avoid making some really, really bad decisions, right? 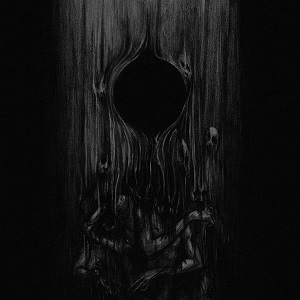 As for Atrament, they’re just at the beginning as far as this unit goes, having formed in 2014 and only having a demo to their credit up to this point. The group is comprised of vocalist Mattia Alagna (Abstracter), guitarist James Meyer (also of Abstracter, as well as Black September), bassist Sam Carr-Prindle, and drummer Chad Gailey (Caffa, Necrot), and they blast and bruise their way through this record, with most songs clocking in at under three minutes. Their urgency and savagery are obvious and tangible, and they rip through this record, painting a picture of the void they imagine in our bleak futures. Kind of depressing, eh?

“No Beyond” begins the trauma, stomping hard, with gruff vocals bruising, the assault rollicking hard, and mucky, brutal pounding setting the pace for “Sunken Reign.” There, gurgly growls team up with muddy smothering, sinking thrash madness and outright vitriol into the mire. “Aberration” is mean and delivered deep from inside the intestines, with black metal-style guitars raining down, and a nasty storm cloud opening up and threatening to drown everyone. “Consumed” has vocals that sound based in blood, while the D-beat-style chaos ruptures veins, and the vocals take on more of a death metal style. Once that song thunders out, we’re right into “Hericide” that stampedes over everything, into sludgy terrain, grimy growls, and a flurry of fists. “Wretched Apparition” also sinks its teeth into death metal, with the song hammering, the tempo chewing bones, and after a brief injection of calm, rips into a black metal-tinged stretch.

“Rotting Twilight” is full of slowly meted-out misery drubbing punishment, and wild howls of, “Cursed to see the future!” that put you into the mentality of our tale’s unfortunate survivors. The final moments charge up the ferocity and spill into “Aeon of Suffering” that is fast, intense, and hellbent on bringing total destruction. The track absolutely obliterates, and then it’s into “World of Ash” that sets up its premise in its title and pays off the promise with speedy, crunchy playing, a strong dose of thrash, and a black, ugly sentiment. “Circle of Wolves” is punchy and threatening, with more black metal-style melodies, and a sense of total devastation so true, you practically can taste soot in your mouth. Closer “Dusk Abuse” finds a strong groove as its front end, and then it launches itself forward violently. The drums smear everything, while the guitar work goes off, infusing some classic metal glory into the mix, and letting every element burn off permanently, leaving the record in a toxic cloud of smoke.

Atrament show a lot of promise and power on “Eternal Downfall,” and here’s hoping humanity will not have eaten itself before these guys have a chance to complete another record. The band has a great sound, hunger, and tenacity, and that shines through again and again on these 11 cuts. Shit may be getting ready to get really ugly really soon, and we’ll have Atrament here to lead us into the gutters forever.

For more on the band, go here: https://www.facebook.com/blackatrament

For more on the label, go here: http://www.brokenlimbsrecordings.net/