It’s really easy these days to get all excited and enthusiastic about death metal, because we’re getting way more good stuff than polished garbage, and newer, younger acts are coming to the forefront. In the States, we have the intermingled Blood Incantation and Spectral Voice, as well as groups such as Gatecreeper and space demons Artificial Brain, and that’s enough good stuff before even having to venture out of this country.

Blasting in from their Danish homeland is yet another solid new addition to the underground death metal fog, that being Phrenelith, who have dropped their thunderous debut record “Desolate Endscape.” The record is being jointly released by Extremely Rotten (cassette), Me Saco un Ojo Records (vinyl), and Dark Descent (CD), and it’s a smothering, fire-breathing test of strength. Over eight songs and nearly 35 minutes, the band—guitarist/vocalist Simon Daniel, guitarist/vocalist David, bassist Jakob, and drummer Tuna—the band takes you down several paths that promise violence, power, and sometimes some outright weirdness. Through it all, they decimate the senses with this record, one you need to hear if you’re finding your hunger for death still unfulfilled. 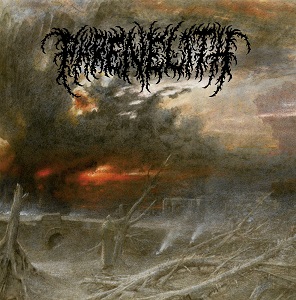 “Conquering Divinity” starts with eerie chimes before it tears open and achieves a sickening pace. Horrid growls and a punishing pace let loose, while the drums pelt your skull. The vocals take another terrifying turn before the song hits a sludgy turn as it ends. “Deluge of Ashes” is pure death, with belchy vocals and a thrashy pace. The cut lurches along while the guitars lead the way and everything comes to a smothering finish. “Eradicated” has a mashing, gory start, as tempo punishes and clobbers, and guttural vocals gurgle grossly. The song becomes a fire flash, with the band drawing to a crushing, devastating end. The title track is an instrumental that has guitars stinging and hanging in the air, while the band takes its time building the momentum. Once the detonation button is pushed, the band thrashes and unloads their fury, with that brutality eventually disappearing into cold guitars and an acoustic outro.

“Crawling Shadows, Slithering Tongues” blisters from its first moments, engaging in a nasty death strike and lathering everything into a full fury. The band smashes bones into powder, with the growls bubbling up and poisoning the churning finish. “Defleshed in Ecstasy” has guitars slicing through the meat of the thing, as the growls burn through, and the guitars take the fiery lead. Everything is scorched to a crisp as the song fades out, leading into “Dysmorphosis” and its heavy serving of noise. The riffs massacre, as the pace rumbles dangerously downhill with no hopes of stopping. Raspy growls mix with the quaking assault, with everything rising toward the danger-filled ending that comes suddenly. Closer “Channeling a Seismic Eruption” is the longest cut at 7:16, and it has a trippy, slurry start that adds a completely different texture. As the song goes on, the speed comes, as ugly vocals turn your stomach, and the drums drop bombs. Total savagery is around every corner, as the band continues to tighten the vice around your head, squeezing until your skull gives out.

Phrenelith pay off the promise they showed on their previous demos and EP by making a devastating full-length debut with “Desolate Endscape.” This is as good a time as any to take a trip into what current underground death has to offer, or to beef up your collection, and Phrenelith is one of the groups who can take you where you need to go. Their sound pulls no punches, and this record will give you a bruising you’ll cherish well into the future.

For more on the band, go here: https://www.facebook.com/phrenelith/