Black metal used to be an intimidating, terrifying force, a thing that made people shudder and listeners to less harsh forms of metal cower in a corner. It’s not so much like that anymore (and some of that is for the better), but there remain bands that when they approach you, it’s best you look away or else pay the consequences.

Long-running Swedish black metal force Craft maintain the reputation of being a monster you don’t want to look in the eyes. Their music hardly is there to make you feel warm and toasty inside (unless you considering burning alive your comfort zone), and any band with a record called “Fuck the Universe” to their credit probably would make the uninhibited shake in their shoes. We hadn’t heard from the band in seven long years since their Carnal Records-issued 2011 album “Void,” but they’ve finally answered the call for more with “White Noise and Black Metal,” their first for Season of Mist. This eight-track, 42-minute record actually is a little short on the white noise, but it makes up for that with hellacious servings of their brand of black metal. The band—vocalist Nox, guitarist/electronics wizard Joakim, guitarist John Doe, and bassist Alex, (Daniel Moilanen handled drums for the album)—spill more hatred and hellfire into the mix, striking fear and chaos in the hearts of anyone who dare go near them. 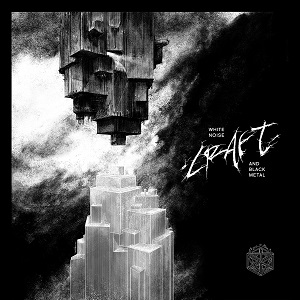 “The Cosmic Sphere Falls” has riffs swirling, drums crushing, and Nox’s gurgling growls bubbling over and smearing blood with piss. The track pulls back later, letting your head swim in the madness, before the black metal spills like rain, and the grimness spirals away. “Again” has mangling riffs and crunching fury, as the growls boil and give off noxious steam. The guitars have a filthy swagger to them, while the vocals are gurgled, and everything ends in a bed of noise. “Undone” has drums plastering, while the guitars charge and unleash speed, and a creaky space sound sends chills down your spine. Nox keeps warbling about “when I die” over and over, and the relentless punishment eventually drowns out in corrosion. “Tragedy of Pointless Games” has riffs charging the engine, while a grimy stomp, and fever-inducing wails make this hypnotic and terrifying. Later, the pace is torn apart, while the vocals crunch teeth on skin, and everything grinds away.

“Darkness Falls” has more of a black n roll feel to it, and it’s the one track here that still hasn’t grabbed me quite yet. Grimy growls and a punchy pace make this feel swollen, while more swagger emerges, and creepy synth murk settles behind the beast. “Crimson” has mesmerizing tones, as melodic fire emerges, and it feels like the entire land is set ablaze. The track calms and gets sleepy, as strange warbling can be heard behind the wall of horrors, and a trudging burst brings this instrumental cut to an end. “YHVH’s Shadow” wages war, as the guitars sear and glimmer, and then the pace speeds up dangerously. Nox’s vocals mangle, while the guitars send lapping waves that choke your lungs, and suddenly you’re sick to your stomach. Strangulating cries pelt with shrapnel, as the track thrashes out in a pool of blood. Closer “White Noise” unleashes threatening riffs, as the tempo bashes skulls together, and harsh growls force you to pay the price. The punishment continues with ill intent, while the growls gurgle, and the guitars send everything in a molten tunnel to hell.

Craft’s utter negativity and pure devotion to blackness is what makes them such a dangerous band with which to contend, and they prove that again on “White Noise and Black Metal.” This long-awaited return has some new twists and turns, but it’s no less deadly than anything else in their catalog. Craft remain a mean, evil force, and it’s hard to imagine accepting them any other way.

For more on the band, go here: https://www.facebook.com/craftblackmetal