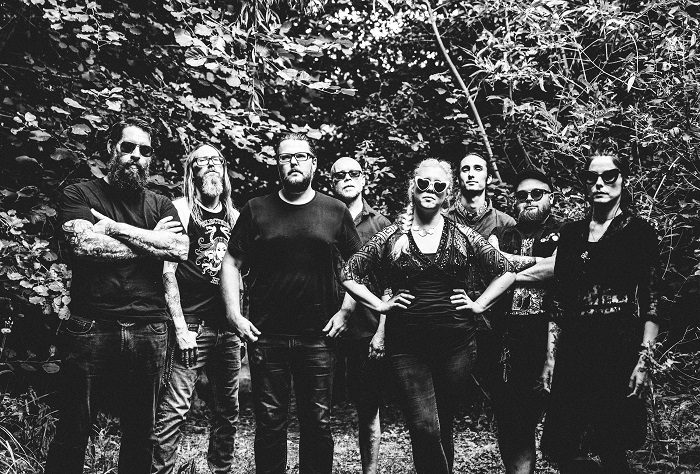 We soon are entering into the darkest part of the year here in the United States, when nature will decay, the daylight will grow scarce, and warmth will retreat for a couple seasons. That also tends to be a time when people’s personal darkness comes back to roost, robbing one of happiness and hope when the lack of daylight and warmth chew away at psyches.

There always has been a thick dark sheen draped over the music made by UK-based band Crippled Black Phoenix, a band that isn’t really in the realm of heavy metal but certainly can spill over into that terrain. Their dramatic, emotional brand of music combines many sound elements including art rock, psychedelics, doom, and prog, yet you can’t really affix a definite label to them. On top of their sound, their songs often are packed with intimacy and personal experiences, as well as reactions to the world going on around them, and all of that comes back in spades on their excellent new record “Great Escape.” The formal follow-up to 2016’s incredible “Bronze” again finds the band unloading sharp epics, biting rock, and dreamy transmissions that could make your blood pump and your tear ducts swell in the same song. Long helmed by multi-instrumentalist Justin Greaves (who played in the past with Iron Monkey and Electric Wizard), he and the rest of the band—Ben Wilsker (drums), Daniel Änghede (vocals, guitar), Jonas Stålhammar (guitar), Tom Greenway (bass), Mark Furnevall (synthesizers, Hammond, backing vocals), Helen Stanley (grand piano, synthesizer, backing vocals, trumpet), and Belinda Kordic (vocals, percussion)—pack these 11 songs with humanity and dark tidings, with each listen more infectious than the one before it.

“You Brought It Upon Yourselves” is a compelling introductory piece built on synthscapes and clips from British philosopher Alan Watts, as well as a piece from the 1972 film “Silent Running.” As the words start to swirl together and repeat, so do their messages on individuality, staying outside the norm, and the fear of a homogenized world. Then “To You I Give” launches, a 9:21-long burst of power that pays homage to love and devotion, even in the midst of chaos. “We’ll make it right, hope we’ll still be here tomorrow,” Änghede calls, while the song continues to build on each element, turning it into a dashing light. The song turns inside out later, with guitars charging, the flood waters rising, and a sweltering end. “Uncivil War Pt. 1” is a proggy, cosmic instrumental led by zapping keys and eeriness before it shifts off into the stars. “Madman” brings some swagger to the record, as the grittier vocals and cold, alien synth back up Änghede’s warning of, “You think I’m fire? Get ready to burn.” “Times, They Are a Raging” follows, an 11:57 piece that begins with piano dripping and solemn melodies, as Änghede tries to hit a unifying note with, “We all bleed just the same, you know.” That transitions into darker, more ominous guitars, as the pace is torn open, soloing is unleashed, and a whirlwind of emotions caterwauls. The intensity keeps flowing until it’s pulled back, only to have quiet accordion lead it from the room.

“Rain Black, Reign Heavy” has guitars rumbling, tensions rising, with Kordic pointing, “How many times do I have to die?” Horns arrive as the song bursts like a storm cloud, with the singing swelling, and the song bleeding out on delicate piano. “Slow Motion Breakdown” opens with church bells, icy synth, and guitars that take on a 1980s feel. Soloing takes off and soars through the skies, as damage is done, and the track fades out in the damaged strains of amusement park melodies. “Nebulas” has a guitar part that reminds me of the Edge when he was still hungry in, like, 1981. It drives the song as Kordic takes lead, calling, “I’m sorry, so sorry,” over the chorus. There is a gust of New Wave bravado, as steely guitars join up and find their way into the murk. “Las Diabolicas” is the shortest non-instrumental track of the set, situating itself in alien terrain, as the vocals sound transmitted from space. “The walls are closing in on you tonight,” Änghede observes, adding a sense of danger to what’s a pretty damn strong song. The record ends on the two-part “Great Escape,” the first a 7:36-long piece that’s the quieter, more psychedelic of the pair. “Don’t wait for me,”  Änghede warns, while tranquil guitars try to soothe, horns slip under a fog before gloriously rising later, and then we’re into the 13:03-long second part that starts with guitar and attitude. The sun blazes over the song’s horizon, feeling like a classic Pink Floyd song that goes to squeeze your heart with its hugeness, and then synth settles in and we’re back to calm. Softer singing and weeping guitars take over before the band sends you on an excursion over the final minutes where layers are placed over steaming layers, the track gushes with emotion, and eventually it slips away and dissolves into the night.

Crippled Black Phoenix manage to weave so many different styles of music, and songs that hammer your heart and soul, and they do so with no pretension and with their own blood on display for you to see. “Great Escape” is a record that should act as a perfect companion for anyone out there struggling with their own darkness are who just find it hard to wake up in the morning and face an increasingly volatile world. Crippled Black Phoenix always manage to take those words and feelings you can’t convey and turn them into ideal statements on the human condition.