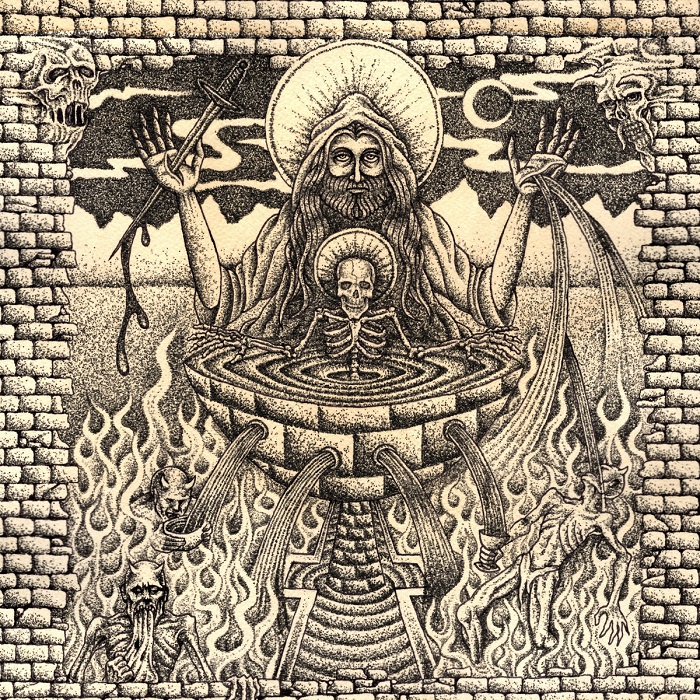 If you’re one of those people who turns up their noses when local artists get opening slots before your favorite bands’ live shows, definitely try to improve that attitude. One of the pleasures I’ve gotten over the years of attending shows here in Pittsburgh is getting a taste of what the bands here have in their arsenal, and I’ve become huge fans of many, so much so that I look forward to them as much as the headliners.

I say that because Pittsburgh’s Ritual Mass got a crack at being one of the first bands to hit the stage during the recent Steel & Bone Vol. 1 fest, and they fucking slayed. Anyone who ever saw them before would not be surprised by this, but it was great to see people there to wreck their bodies and hearing to Immortal Bird, Tomb Mold, and Horrendous were just as enthused by this band’s set that was short but totally satisfying. Now, just a couple weeks later, they’re back with their second release “Abhorred in the Eyes of God,” a four-track, 12-minute effort that’s nicely sized to give you an example of what they do and why they’re one of Pittsburgh’s, and metal’s, more promising death squads.

“Grievous Sin” tears the record open and begins to crush bodies right away as primal growls are unleashed, and the tempo adds ample pressure to listeners’ skulls. Severe pounding and nasty growls roll through, and the playing is meaty, massive, and deadly. “Seated at the Right Hand of the Lord” is a monster that blows flames in faces and smears soot across the world. The playing is crunchy and violently catchy as the growls mash, and then slow-driving hell begins to spread. The final minute of the song it utterly gut wrenching, and then it bleeds into “Servant” and its all-consuming riffs. The track spirals dangerously as the playing breaks down and spits nails, proverbially shoving its hands over mouths in an effort to cut off breath. “Devoured” closes the assault with killer guitars coming to life, the growls scraping off flesh, and an all-out animalistic display flexing its muscle. It feels like the song is trying to peel back scabs and going to chew into bone as mangling growls deliver the final blows, and the track stings and fades.

Ritual Mass have been making their way through the Pittsburgh underground, and “Abhorred in the Eyes of God” is a monstrous display that demonstrates to the rest of the world what we locals already know about them. They’re a sharp, devastating group that proves its meddle live and pour that into these four songs. This is only the dawn of Ritual Mass’ campaign, and they’re likely not finished until they amass a tidal wave of willingly collected broken bodies.

For more on the band or to buy the album, go here: http://ritualmass.bandcamp.com/