There are many band names that, once you hear them, you have a decent idea as to what the music might sound like. Did anyone think Bolt Thrower was going to be brainy prog? Did any listener expect warm folk passages when they first learned of Morbid Angel? Did anyone think a band called Mastodon could one day make boring-ass records that are forgettable the moment they’re over?

Despite doing this site for, holy shit, eight years now (?!), I haven’t heard of or especially heard every band, no matter how many records a group might have. So, when “Acts of Repentance,” the fourth long player from Australian blasters Wardaemonic landed in my email, I wasn’t super familiar with them. But I expected outright chaos and violence in their music, and wouldn’t you know it, that’s just what I got. Over five tracks and nearly 46 minutes, we’re treated to mammoth-sized tracks that bludgeon through and through. There also are pockets of strangeness and disorientation that could scramble your brains as the band—vocalist/drummer Maelstrom, guitarist Lord Bane, lead guitarist Anharat, bassist/synth programmer Blitz—adds imagination to their vile assault instead of just obliterating with no variety. 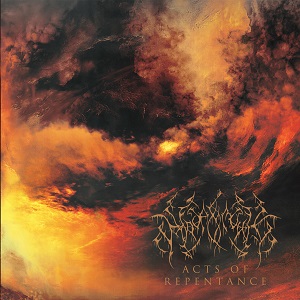 “Act I – Introspection” starts with dreary strangeness before aggression begins to pound away, and the playing blisters and destroys. An odd haze swims through the fury as an intense pace clobbers, and rubbery guitars confound. Crazed shrieks rain down as the track erupts into infernal mashing, hissing wildly before spilling into “Act II – Admission” that fires up right off the band. The band clubs as a monstrous pace creates a mound of ash, while the guitar work burns through proverbial barrels of fuel. Red clouds hang overhead as a furious storm arrives in downpours, there is a blur of chaos that ignites, and the final minutes are bathed in psyche strangeness and guttural pummeling.

“Act III – Castigation” has fog marring vision while scary chills go down your spine, and then the drums begin marching hard as the growls well up. Stinging hysteria chews at the psyche while the guitars mix through, and a coldfront approaches. The song chugs at mid-tempo while the playing reopens, guitars spiral, and the track drips away. “Act IV – Sufferance” delivers cosmic coldness before animalistic growls tear through time, and clean bellows smoosh your chest. Cool riffs spark further blazing, simmering in their juices, creating eerie strains. The track levels all over again with murky singing, melodies rupturing, and the assault bleeding away. “Act V – Repentance” ends the record by starting with tornadic pressure as the growls eat away, and the drumming decimates. Clean guitars flow in later and have a numbing effect, bringing temporary reprieve before the hammers drop again. The playing ravages the mind, the wind whips, and noise rises and burns away, bringing the record to a smoldering end.

Wardaemonic deliver exactly what you think they do on “Acts of Repentance”: smothering punishment that warps you mind. It’s been five years since we got new material from this band, and in that time, it seems as if they stored up aggression and frustration and unleashed it on this record. This is a cataclysmic display that leaves your flesh scorched and your psyche scarred.

For more on the band, go here: https://www.facebook.com/Wardaemonic