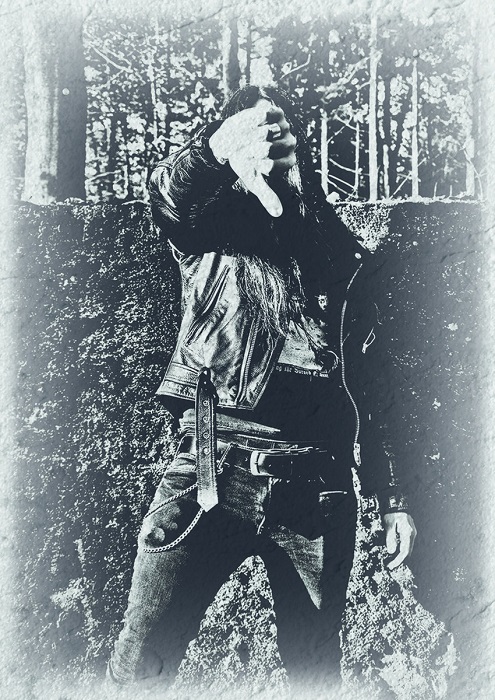 It’s been a heartbreaking, infuriating, gut-wrenching, yet in some ways galvanizing last couple weeks here in the United States and now across the globe. The most important election in this nation’s history is on its way, and there aren’t a lot of great choices, but there sure as shit is one nightmarish option. People are trying to take a modicum of power to protect those who continually suffer at authority’s hands, a battle that has made its way all over the world.

There could be no better time for “II,” the second record from Uprising, to land, as it feels like it was written specifically for this time. The solo project of Winterherz (though he goes by just W for this project) who you already know from the mighty Waldgeflüster, he lashes out again fascism, capitalism,  lop-sided power structures, and religion in as direct and unflinching a manner possible. The words, some of which we quote below, are going to resonate with those who have taken to the streets, who are driving efforts to get more people to the polls, who are battling back against poisonous misinformation campaigns that prey on people with lesser income and lower educations because they know they can. This is black metal to fight that war, one that can’t end until the words “liberty and justice for all” are actually true for everyone on this planet. This record isn’t going to be able to solve those problems, but it’s a ferocious partner in the fight to help keeping our blood boiling.

“Introduction” churns with fuzzy voices calling for uprising before that sizzles out and works into “There’s No Such Thing as Hope” that blasts and surges with melody. Dark tidings arrive quickly while the melodies flood and blaze down, which they do all over this record. W’s vocals are righteous and furious as the playing is fluid and violent, with him ending the track with, “What is left to believe in?
Let ashes rain from the heavens like death reigns all being, there’s no such thing as hope.” “Uprise Part II” has riffs gushing and gruff clean singing charging as the pace feels like glorious burning. Vicious howls and a pace that mashes away combine and rupture the earth as W calls, “Uprise above the skies,
strike off your puppet strings with a rebellious song to sing, uprise above all kings.” Utter vitriol is served as the song reaches into rousing madness and then fades to black. “A Lesson in Basic Human Empathy” has the bass recoiling and complete savagery arriving, while W goes on the attack again vocally. “Stand up against injustice, indifference is unacceptable, defend those who cannot,” which are amazing words to live by, as the song clobbers away and unites with fuck-you sentiment to those who cannot show a single strain of compassion for others.

“Monuments” begins with acoustic strains before the bottom is ripped out, and the playing crushes cowards. Scathing howls rip away as the playing trudges without mercy, and even the atmospheric sections feel like they’re holding thunder. The song maintains a devastating pace as the vocals scrape at skin, rousing cleanly sung parts get your heart pumping, and the track then returns to its acoustic origins. “The Iron Eagles Still Fly” focuses on the Lion Air Flight 610 crash that killed 189 people in 2018 and the Ethiopian Airlines Flight 302 crash that claimed 157 lives in 2019 that both were determined to have the same mechanical cause. The song is smothering but also angering and heartbreaking as W wails, “You set the world afire for 346 innocent, all for money and power, thought this would be your end.” The playing has frantic corners and releases raucous energy as W rails against those who failed to adhere to basic rules, bringing the song to a stunning finish. “Radical Decency” ends the record and begins with a disruptive thrashiness that cuts to the core. W hammers on societal inequality and purposeful division of classes as his vocals shred, and the leads burn with glory. Shrieks rain down as the thunderous playing works to solidify forces seeking social justice. “Burn down every fortress of the forever yesterdays, they denied you justice time and time and time again,” W wails as the playing drives with force and the promise to never stop the fight until true equality is achieved.

W could not have known just how vital “II” would be on a worldwide scale when he wrote the music, but this is a cosmically ideal time for Uprising’s return to our world. People are fighting for justice all over right now, and despite a cause that should be so obvious, there still are those who refuse to get rid of their hatred and still want to lick the boots. Uprising have no time for that, and if you’re going to continue to add to a problem that have hurt so many people, you’ll be trampled under entirely different sets of boots as your views continue to lose relevance.

For more on the band, go here: https://www.facebook.com/uprisingblackmetal/

For more on the label, go here: https://www.facebook.com/TridroidRecords/