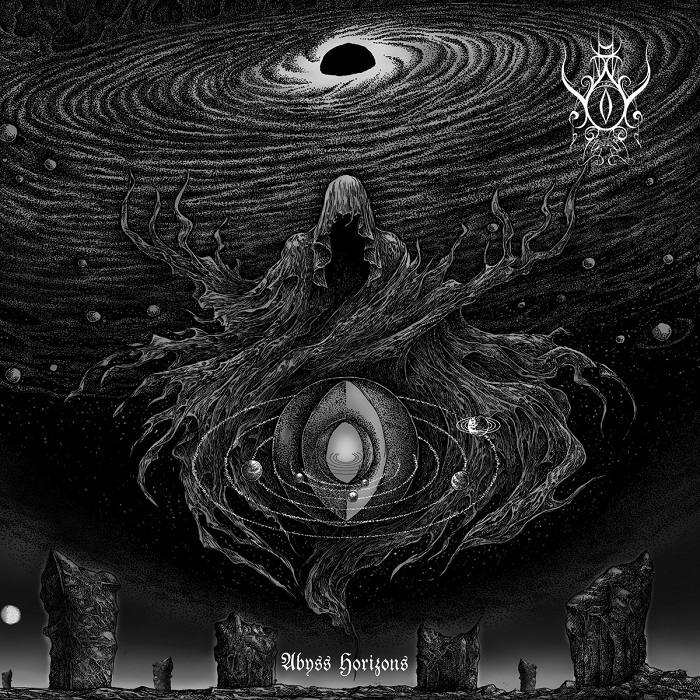 Have you ever gazed into the night sky and into the elements of the universe you can see and wonder what could be going on in places millions of light years beyond our planet? I’ve done this for years, often wondering if there are worlds in the same type of disarray as ours or if anyone or anything has reached themselves beyond their current physical plane.

Long-running cosmic black metal creature Battle Dagorath—helmed solely by Black Sorcerer Battle at this moment—has been creating music that sparks you to imagine the beyond over the course of the past 18 years and six full-length records, their latest “Abyss Horizons” having recently landed in our laps. If you’ve been on board with this project, you’re going to feel right at home with these eight tracks and 73 minutes of intense and dreamscaped sounds, where at times you’re being drilled into psychosis and others where calm waters from other planes wash over your mind. These pieces are elaborate and envelope you in space wonders but also reveal journeys beyond oneself, into ancient mysticism, crossing realms and dimensions,  and making sure the music gets you there. And every step of the way, it very much does.

“Womb of the Labyrinth” is a quick introduction track with strange synth passages, chants, and the feeling of cult-like adulation, leading into 16:07-long “Incantation of the Vortexx.” Keys swirl as the guitars ignite, and hypnosis spreads over the track, shrieks shredding time. As the track goes, the playing goes back and forth from black metal savagery to calmer, quieter pockets, as if storms are building to ultimate violence and then subsiding. Chaotic immersion seems to melt within the stars as the playing rushes as the final surge melts away. “Spectral Emanations” is a quick instrumental piece that sits in static as lush noises knock, and winds pierce with sci-fi imagination. “Phantasmal Eye of Dreams” is the longest track, running 16:15 and starting with vocals wrenching and a stunning pace that captures your mind. Melodies flood as the playing fills your ears and brings strange visions while a synth pocket unhinges its jaws and tries to swallow you whole, unleashing fireballs and madness before slowly trickling away into the night.

“A Voiceless Call” is the final quick interlude track and has organs calling, bells chiming, and a strange feeling washing over you as it segues into “Conjuring the Starwinds” that’s a healthy 14:14. The guitars catch fire as banshee howls rain down and cover the ground, chilly wooshes sweep across, and it feels like alien nightmares are about to come true. The charges then reignite as the wartorn hell is unleashed anew, the shrieks smear the senses, and the track dissolves into strange miasma. “Twilight of the Cold Sun” is freezing from the start, as reflective synth unfurls and blankets its entire reach while the playing blasts away, with the vocals crushing. A new synth bath causes the flesh to rise and goosebump as the cold fury keeps its pace, swirling into galactic power and dissolving into meat of planets not yet discovered. “Saturnian Moons” is the instrumental closer where synth simmers and glows on the horizon, numbing your brain. It feels like slowly being drawn into a space void as the playing pulsates, finally disappearing into unexplored mysteries.

Cosmic black metal is terrain Battle Dagorath essentially own and have operated since they bubbled into existence nearly 20 years ago. “Abyss Horizons” keeps their imaginative adventures going and hurtling even deeper into space, where no human ever has or ever will tread, shattering your psyche. This band has created visions only their dreams could bring to reality, and their existence again proves to be one of black metal’s most interesting corners.

For more on the band, go here: https://www.facebook.com/BattleDagorath

For more on the label, go here: https://avantgardemusic.com/