We’re staring another Friday in the face, and remember when this used to be a fun stretch of 24 hours where you could escape the daily madness of the week and stretch out your experiences by doing fun shit in order to appease your aching brain? Yeah, the good times. We can’t really do that in the same way, so excuse me while the tension mounts.

I don’t have anything in this second graph that’s going to make you feel any better about that, but we do have the debut record from Draghkar to discuss, and that should at least make you look forward to having this in your hands. Anyway, “At the Crossroads of Infinity” is a smasher of a record, a six-track, 35-minute burst that’s perfectly portioned and will leave you mangled and torn. And that’s not so bad because how are you really feeling these past 6 months? The band—vocalist Daniel Butler, guitarists Brandon Corsair and K.S. Kuciemba, bassist Camron Fisher, drummer Phil Segitho—is comprised of groups such as Acephalix, Vastum, Drawn and Quartered, Plague Bearer, Grave Spirit, and a ton more, and they’ve previously offered up a couple splits, an EP, and other smaller releases before finally landing on this beast of a debut record that pays off all of the deadly promised they showed along the way. 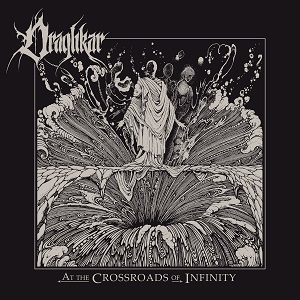 “The First Death” opens up with guitars catching fire and the pace galloping, while Butler’s barked wails blast you like shrapnel. The track keeps getting uglier all while taking on more melody, and the leads bubble up as the growls scrape flesh raw. The soloing bursts in and sends lasers, while clean warbling ices brains, and a smashing barrage takes the song to its finish. “Beyond Despair, the Dawn of Rebirth” has a huge start with powerful leads and a charging pace, with Butler scowling away, his growls taking on filth and blood. The guitar work is super catchy, even amid such violence, while growls rip back in, and the track hammers closed. “An Erosion of the Eternal Soul” runs 8:07 and begins in the midst of a doomy haze where the leads slowly thaw the ice, and then the playing surges with raw growls and mashing intent. A moody pall spreads over the song as classic metal guitar work flows, with the soloing going for throats. Thunderous leads usher in a heavy lava flow, vile growls punish, and the playing gallops and lays waste to all.

“Seeking Oblivion” has eerie clean chants, a Butler trait for sure, before doomy drapes drop, and the guitars sprawl, crushing wills. The playing begins to thrash hard as the growls punish, and the leads swelter. Everything aims toward insanity as the track ends in glorious devastation. “Pursued by Black Forms” enters in a fray of madness, slamming away with a tremendous fury as the vocals look to destroy souls. The leads bleed fire as they race melodically, while the bass bubbles with cosmic weirdness, and the gates crash down hard. The title cut closes the album, the other 8:07-long track. This starts mystically as twin guitars join in the murk, and things progress in a calculated pace. Then the aggravation hits as the band slips into something that resembles Maiden trudging through death metal terrain while the bass is proggy as hell, and the vocals slam home the dagger. The leads boil before reigniting as the track lurches into ominous glory, growls scar, and strange chants bleed into a synth mist that carries off into the night.

Draghkar’s crushing debut “At the Crossroads of Infinity” is one of those albums that drops just when you need a boost or your ass kicked or both. It definitely plays in the deep end of death metal but with creative bursts and prog secrets that make the thing uglier and more infectious. Everyone in this band has a lot of other shit going on, but hopefully this is just the first burst from a band that sounds like they could give a lot of modern death bands a run for their money.

For more on the band, go here: https://www.facebook.com/DraghkarBand/

For more on the label, go here: http://www.unspeakableaxerecords.com/