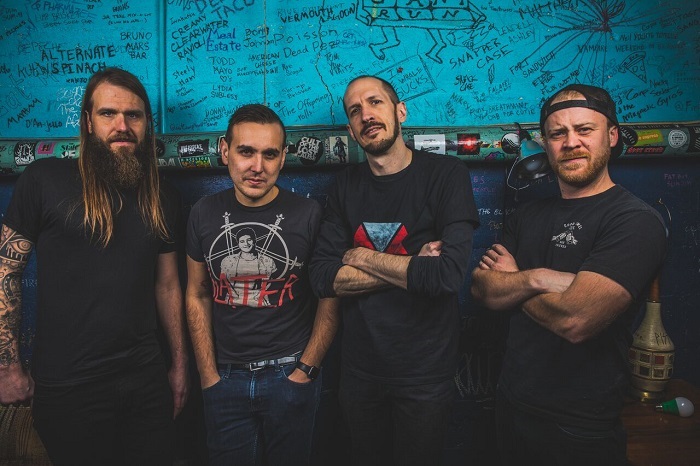 Finding a means of escape these days is not easy for a lot of people because there is just so much suffering and misery that letting your mind wander can be a challenge. But it’s not impossible, and if you can find something in which to immerse yourself and let the anxiety take a fucking break for a second, it can be invaluable for your mental health.

This is where Colorado-based crushers Necropanther enter the mix, as their new EP “In Depths We Sleep” can be a perfect antidote for when you feel like shit. For this EP, the third one in their series of smaller releases between full-length albums, guitarist/vocalist Paul Anop dug back into some of the material he created for his Whalefalls project, centering on oceanic power and might that he presented to the rest of the band to make up this release. The other panthers of necro—guitarist Joe Johnson, bassist Marcus Corich, drummer Haakon Sjogren—recorded their parts themselves and did not work in person due to COVID issues, though you never would know that as modern technology is impressive, and these guys are just really good players who still can pack emotion and energy, even at a distance.

“The Descent” floats in slowly as synth rises and creates fog, as well as a heavy mood, then the growls begin to rumble, and the storming hangs overhead. The vocals turn shriekier as the pace pelts away before disappearing into the ether. “Benthic Storms,” the only newly written song, has a glorious and black metal-style punishment before the shrieks start raining nails into the vulnerable ground. Power and glory unite as the leads fire up, the drums hammer away, the tempo pulses your blood, and then everything fades into the distance. “Abyssal Plains” has winds whipping and the sounds of the ocean eating away as the guitars echo, and strong leads begin to navigate through choppy waters. Dark and emotional, this instrumental track then winds into the unknown, taking us deeper into the heart of the chaos and into closer “Cheers to Seth Davey” that begins morbidly before the growls start carving a path. Great leads flush while the tempo picks up considerable speed, and the band chugs hard, swishing around all your stomach contents. Guitars wash over as the melodies become overwhelming in a great way, and then everything chimes and slowly moves into the distance like the ghost of a story.

Necropanther put a lot of fun and imagination into “In Depths We Sleep,” their third EP and decidedly the most aquatic to this date. It’s an economically sized and easy-to-digest burst of thrash and death that batters and bruises you but leaves you wholly satisfied when it’s done. Not sure how much longer we’re going to be fired up about sea chanties as a society, but Necropanther have put a more violent spin on aquatic tales, and you’re going to wind up getting hurt if you get swept up into the waves.

For more on the band, go here: https://www.facebook.com/Necropanther