It’s always exciting getting new music from a band you like and have followed for some time, and when that group makes tweaks and changes things around, it can get a little nerve wracking. But when those alterations enhance the music and add an intriguing entry into the band’s body of work, it can make that new music even more exciting.

We say that as Caïna have returned with a new record “Take Me Away From All This Death” that, if you compare it to the project’s earlier records, you’ll wonder where you made a weird turn. But if you’ve been following along lately and know a few things about sole creator Andrew Curtis-Brignell’s tastes and inspirations (he’s a pretty open book on these things on his Twitter feed), the music you’ll find on this enthralling eight-track collection will make all the sense in the world. There are only a few hidden traces of black metal here and a whole lot of gothy, dingy post-punk, synth-scuffed power, and a feeling like you’re going down the drain of a nightmare that never seems to let you wake up. It’s a record I keep going back to, and it rewards and terrifies every time I jump back into its guts. 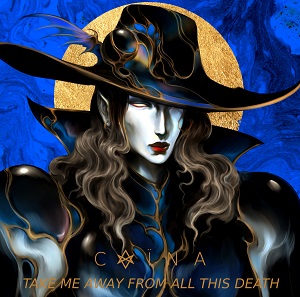 “Bleeding Light” has a chilling open and Curtis-Brignell’s voice sounds properly mechanical as clean calls mix with industrial heat. Strange warbling creeps as the music pounds harder, eventually melting into nighttime fog. Things then glisten in the dawn, roars explode anew, and a chilly, feverish wind causes your flesh to crawl. “Castlevanian Hunger” plinks as synth works its way in, shrieks batter, and noises scrape flesh. The formula fires up as hell is unleashed, sounds sting ears, and everything crumbles into static. “Powder Blood” brings forceful howls and a mashing pace as Curtis-Brignell coldly observes, “Life circling around the drain,” a feeling I’m sure we’ve all had in the past year. The back end of the track smears with power, repeating that hopeless mantra as everything ends in flames. “In Rivulets, In Torrents” delivers cosmic noises swimming as the synth begins attacking, and sounds hurtle through the cosmos as this instrumental cut dissolves.

The title track slips in with keys icing over and beats pounding as Curtis-Brignell digs deeply as he sings, feeling very New Wave in its approach. Guitars well up as deep sorrow swamps, building to a morbid chorus that feels like it’s operating in mystery, unsure where to grip the walls. As your disorientation increases, the chorus keeps rounding back and chewing at you, anxiety spikes, and the synth stirs before bowing out. “Oceans of Time (Hail to Robert Smith)” has frigid synth and cool beats rushing into a warming pattern that makes it easy for your head to go swimming. Gazey fires and breezy winds increase the emotion as the playing rushes through the clouds, surging into driving rains. “Low Moon Over Carpathia” begins ominously as it creeps through, making cold tributaries snake through your body as the night takes hold again, making you feel claustrophobic as the instrumental heads toward closer “Circle of Flames” where the singing bellows, and the keys dare you to open your eyes. Danger floats as the vocals get stronger and more alluring, shadowy pulsating blasts your guts, and sounds sting and swell. Guitars jar, bringing a heavy post-rock vibe, then everything is swallowed up by strange keys that coldly wakes you up from your dream.

Caïna’s path never has been a straightforward one, and that’s kept the music Curtis-Brignell creates each time out leaving you guessing where he’s going. “Take Me Away From All This Death” is a further push away from black metal and into gothy madness and post-rock frigidity, and it’s a really exciting new chapter. Who knows what state Caïna will be in next time around, but if this record is any indication, there’s absolutely no way to properly predict that journey.

For more on the band, go here: https://www.facebook.com/cainaband/