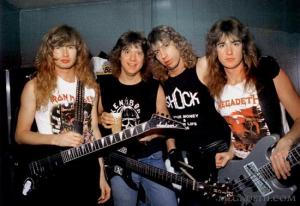 In the 25 years since “Peace Sells … But Who’s Buying” was released by Capitol Records, so much has changed with the legendary thrash band Megadeth, yet so little else has been altered. The government remains a shady entity, people still judge others based on what they see on the surface, seedy dudes still slip into bed late at night — well after their girlfriends or wives have gone to sleep — with the filth of the evening still cake on them.

A quarter century after its November 1986 release, Capitol is releasing a re-mastered version of the album (yes, again) and it will come out in two forms – double CD or mammoth box set. It’ll depend on just how much you love this band when deciding on which version you’ll choose to purchase. And really, OK, I get it, people download these days. No one buys physical products, right? I mean, I do, but whatever. That said, this is one of those albums you need to own in physical form. It’s a landmark, a touchstone, and no matter how you feel about where this band went since that time, it can’t be denied how great and influential this record has been over time. So go buy a copy because it’ll make you a better person and a more-informed metal fan.

Anyhow, this record followed the band’s unsteady, incredibly unpolished, yet still quite good debut “Killing Is My Business … and Business Is Good,” that came right off the cusp of band frontman Dave Mustaine being unceremoniously dumped by Metallica. That, of course, led to plenty of animosity between the two bands, and it’s been said Mustaine always felt he had something to prove for the scorn he felt. But imagine if Mustaine never got tossed? We’d have missed out on “Peace Sells,” “Rust in Peace” and even decent efforts such as “So Far, So Good … So What!” (they did love the ellipses) and their last effort “Endgame,” that was a pretty decent album from a veteran band that seemed to find its way back to the path of righteousness. Imagine not having those records in our metal lexicon. That’s a gigantic gap. Not having seminal songs such as “Peace Sells,” “Wake Up Dead” and “Devil’s Island” from the “Peace Sells” album would be as great a crime to humanity as some of the atrocities Mustaine has touched upon over the years. That’s a bit over the top, sure, but these songs are such a strong part of the fabric of my middle school and high school years, I can’t imagine what it would have been like not having these songs as anthems.

With this 25th anniversary collection, we get another redone version of the “Peace Sells” album that sounds absolutely sparkling. Megadeth’s music is such that the better production you can get, the better, or at least that’s how I feel. So being able to put these songs on my iPod and have them sound just as lively (or as lively as digital music can sound) as the rest of my vast collection is a cool thing to have. Plus, since I already had the original CD version of “Peace Sells” and never bought the previous reissue, this is a valuable addition for me. The two-disc version contains the re-mastered album on one CD, and a 13-track live performance, from their first world tour in 1987, on the other. The live document is raw and feels like it was plucked right from that era, and if they did any cleaning up of sound, it isn’t obvious. I like that touch, and the live cuts feature a hungry, youthful band whose best years were ahead of them. Well, at least Mustaine and bassist Dave Ellefson would go onto greater glory with Megadeth, as drummer Gar Samuelson and guitarist Chris Poland exited the band following the album’s cycle. It would be the start of the great Megadeth revolving door. Funny enough, only Mustaine and Ellefson remain to this day, and that’s after Ellefson took a long, bitter break from the band, only to return in 2010.

The box set version of the project is for diehards only. You get the same two discs as the two-CD version, but also included are two “Peace Sells” remix efforts, one by Dave Mustaine for the 2004 reissue project, and one by Randy Burns (and handful of which appeared on the 2004 reissue). To be honest, I don’t hear a great deal of difference in the remixed versions of the songs to justify listening to these two discs more than once. There are some nuances that feel a little different, and if you have religiously listened to this record for 25 years as I have, you’ll notice some neat quirks, but it’s more something for completists than anything. There’s also a fifth disc that contains the original “Peace Sells” album and the live performance in high-resolution audio. Also with the box set are three vinyl LPs, the first with the re-mastered album, the second two with the live show. That’s a lot of the same thing over and over again, but whatever. You also get two 8X10 photos (remember those?!), reproduced vintage concert flyers and a concert stub. A big surprise is, included with both versions, liner notes written by Mustaine and … Lars Ulrich? Just think about how surprised you’d be in 2004, when the last reissue came out, if they told you this would happen with the box set. You’d punch the person delivering this silly information, would you not? Shows you how far these bands have come personally. Well, that and both participating in The Big Four series.

I’m a big fan of these types of projects, and I’d previously written about last year’s like-minded pieces that came out on Pantera’s “Cowboys From Hell” and Queensryche’s “Empire.” It’s cool to have a fresh version of an album that’s important to your life and musical upbringing, and for newer or younger fans, it’s a way for them to enjoy some history. This is definitely worth your time and money, and while I may find the box set a little tedious, I’m sure there are tons of people who will spend hours with all five discs and all three LPs. All of this also sets up nicely for Megadeth’s run on this summer’s Mayhem fest and their upcoming new studio album. This is one of the most important documents in heavy metal history, one that still speaks to us 25 years later. It can mean as much to today’s high school kids as it did to me when I was struggling to find my place in the world.

(NOTE: Huge thanks to Capitol for getting all this material to me.)