The metal, oh how it’s building up in the corner of my room. This is one of those times of year when getting a handle on everything new that’s either in stores or on its way is growing burdensome. I am losing track. But that’s not necessarily a bad thing, really, because it keeps me busy and it puts fresh music in my ears. So off we go with a quick look at a few new records that explore different subgenres in the ever-growing metallic universe.

“Inside Room” is the debut from British doom band 40 Watt Sun, an effort spearheaded by former Warning leader Patrick Walker, who did some great things with his former band, not the least of which is 2006’s amazing “Watching From a Distance,” the last full album of their lifespan. Like Warning, this music is dark and somber, but a little less aggressive, and Walker’s emotional outpouring is what makes this excellent record shine.

Now, unlike most doom bands these days (and I’m certainly not complaining about this) whose vocals tend to be uglier and deathier

than what the roots groups employed, Walker instead emotes cleanly, clearly and succinctly. 40 Watt Sun are more in the vein of other British doom bands such as Anathema, My Dying Bride, Candlemass and Katatonia, and they’d be an excellent opening act on the upcoming Opeth/Katatonia jaunt in the United States. That audience would eat this up. The five songs on “The Inside Room” are earnest and direct, and it sounds as if heartbreak, relationship struggles and misunderstandings fueled a lot of what inspired Walker and the rest of the band – drummer Christian Leitch (also ex-Warning, The River) and bassist William Spong – to create these epics. The music is doom-encrusted for sure, and the pace is mostly mid-tempo and downtrodden, but Walker’s voice just soars as if his heart is trying to disengage from his chest to tell his story to the rest of the world.

“Between Times” is the track mentioned as the focus cut in the bio information supplied by Metal Blade (who are releasing this in America … what a year for Metal Blade, by the way), and it’s a great song, but I get so lost in the two opening tracks “Restless” and “Open My Eyes” that everything that follows seems to pale in comparison. And those other songs are really damn good. This will make great listening for damp fall weekends when soaked leaves blanket the ground. I know it’ll still be in my rotation when those days arrive.

To buy “The Inside Room,” go here: http://www.indiemerchstore.com/b/40-watt-sun/ 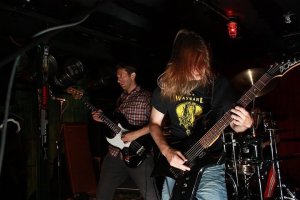 The debut EP from Flourishing “A Momentary Sense of the Immediate World” was one of those last year that ripped my eyelids open and forced me to take notice. It was a great mini-effort and an explosive first volley into the metal world from a band that seemed to be interested in doing things a little differently and with a more volatile attitude. That made the wait for their first full-length an anxious one, but now that platter has landed by way of “The Sum of All Fossils” (released by A Path Less Traveled). It seemed almost impossible, but they managed to come up with something more earthquakingly heavy and experimentally challenging, and chances are you won’t hear anything quite like it the rest of 2011.

Flourishing’s ranks are made up of vocalist/guitarist Garrett Bussanick, who is one of the guitarists for Wetnurse, a band you should go out of your way to hear now if you’re not familiar with them, bassist Erik Rizk, and drummer Brian Corcoran. When you tackle “Fossils” and are baffled that only three guys can make this much noise, chances are you’re not alone. There’s an industrial suffocation to what these guys do, and by that I don’t mean, like, Ministry or something. Their music sounds like it was constructed by cranes, heavy-load dump trucks, steaming cement trucks and crews of folks putting in hard labor underneath an unforgiving sun. It’s steel bridge heavy. You’ll need a hard hat and a tool belt. Of course, there’s also an off-kilter weirdness to what they do, and a lazy person (that’s me!) might chalk it up as math metal, but it’s really more than that. “A Thimble’s Worth” has a hardcore flare to it, and its tempo is dizzying; “The Prospects of Rejection” has a thick bassline and spiraling guitars that leave you reaching for a steady wall; “In Vivid Monochrome” is all smashing chaos and doom-and-zoom guitars; and “As If Bathed in Excellence” caps the record on a stunning, baffling note, almost warning you that if you’re reeling from what you heard here, you have no idea what’s coming next.

It may take some listens to fully absorb and digest “The Sum of All Fossils,” because there’s a lot to chew here. But each trip back is rewarding, painful in a good way, and enveloping in a manner so many metal records these fail to achieve. Great first full-length.

For more on the band, go here: http://www.facebook.com/flourishingnyc

To buy “The Sum of All Fossils,” go here: http://tpltr.bigcartel.com/

For more on the label, go here: http://www.thepathlesstraveledrecords.com/ 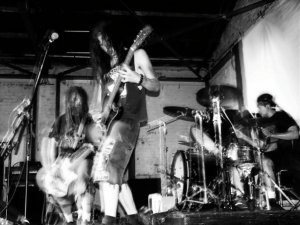 We haven’t heard from Oakland, Calif., sludge maulers Brainoil since their 2003 self-titled debut (released by Life Is Abuse), but eight years later, here they come blazing back again with “Death of This Dry Season,” released by the always reliable 20 Buck Spin. Since then, its members haven’t exactly been dormant, as they played with other notables bands such as Laudanum, Scarecrow, Watch Them Die, Dead Language, and that’s just some of them. But over the past few years, Brainoil’s members got back together, started playing music again, and that path is what led us to this seven-track, 25-minute effort that their longtime fans probably wondered if they’d ever see or hear.

Eyehategod, Buzzov*en,  and Corrosion of Conformity with their muddy, sometimes groove-laden thrashing that is easy to get into and has enough groove to keep your fist pounding on the table. These guys waste no time getting started, as they hammer through the opening title cut and “Gravity Is a Relic,” with its steamrolling pace and throaty screaming. “Feet Cling to the Rotting Soil” is a faster cut and has a punk spinal column; “To Bury the Pages of Existence” also hits like lightning but also has a bluesy base; and “Crimson Shadows” is relentless and vicious, showing their willingness to draw blood. One drawback is some of the riffing, especially the opening parts of these songs, has a bit of samey-ness, which is probably more noticeable because the record is so short. Then again, that seems to be the punk rock spirit coming out of them, and it’s not tiring and distracting or anything. It’s just noticeable. Nonetheless, it’s a rousing, bruising comeback album, and it’s great to have this band back in the conversation, especially since the sludge subgenre has grown so steadily the last half-decade.

To buy “Death of This Dry Season,” go here: http://www.20buckspin.com/site/releases/spin041-brainoil-death-of-this-dry-season-lp/

For more on the label, go here: http://www.20buckspin.com/site/