With reissues being the theme of the week, we have another trio of refurbished albums out on the market by way of Deepsend, and if you’re psyched about all things death metal (um, and some black metal), you’ll probably be pretty stoked by their offerings.

Deepsend isn’t solely in the reissue game, mind you. They also have impressive bands putting out brand new stuff, including the upcoming effort “Feeding the Inevitable” from The Cleansing, that we’ll be taking a look at really soon, as well as the new killer from Spectral Mortuary called “Total Depravity.” They have a really brutal roster, and it isn’t packed with bands that are interested in clean sounds, pristine production, and color spreads in magazines. They do it raw and ugly, and it makes Deepsend a reliable place for those who like genuine death metal. But today we’re going to look at some of the music they are reintroducing to the marketplace, all from bands you probably know about. But don’t hesitate to see what else this label has to offer, because if you’re looking to buy these three albums, you’ll probably like their newer artists who maybe haven’t reached your headspace yet.

For more on the label, go here: http://www.deepsend.com/?page=1

Getting “From Wisdom to Hate” by Gorguts back out in circulation is a pretty shrewd move, and it should help both Deepsend and the band in spades. See, Canadian death legends Gorguts have reformed and are working on a new record that’s expected to drop later this year or next on Century Media. But this new incarnation of the band should please fans and music tech geeks alike, as longtime leader Luc Lemay has added guitar wizard Kevin Hufnagel (Dysrhythmia) and bass monster Colin Martson (Krallice, Dysrhythmia, Behold … the Arctopus), so you probably can imagine how ridiculous that’s going to sound (the early clips prove this true, by the way). 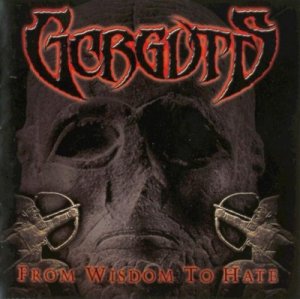 Not that Gorguts haven’t always leaned way into technicality, because clearly they always have, but their 2001 album “From Wisdom the Hate,” the last full-length Lemay’s band put out, was a bit of a mix between a more streamlined sound of their earlier work and the batshit insanity of 1998’s “Obscura,” a Gorguts classic. There was some hand wringing over that at the time, but a decade later, especially after death metal’s been completely oversaturated and, as a result, significantly watered down, this thing sounds like a breath of fresh air. The craziness is there, and while it may not be quite as dominant as the record that preceded it, the guys didn’t back off using their wealth of skills. It’s airy, melodic, but always beastly and crushing. My guess is it won’t sound a thing like their upcoming record, simply because of the radically realigned lineup, but who cares? I’ve always been a guy who never really liked super techy death metal because too often it feels like all science and no emotion, but “From Wisdom to Hate” never falls into that trap. That’s probably why I always embraced this record and still do to this day. Glad it’s back in circulation.

For more on the band, go here: http://www.gorguts.com/

I always have had a soft spot in my heart for Japanese death scoundrels Coffins. First of all, what a simplistic yet amazingly fitting name. If you were in a record store where everything was thrown together, with no genre designations, and you really wanted to hear some death metal, you’d know you’d be getting it by seeing the name Coffins. How could anyone mistake that for anything else? Plus, their album covers always are morbidly creepy, and there’s never any doubt, just by looking at their record artwork, that you’re in for a night in the graveyard. The fact that they don’t speak English yet growl all of their lyrics in that tongue is nothing short of precious. This is pure, old-school death through and through, and it’s a total blast to hear. It’s ideal for a night of sitting with friends, getting devastated, and testing the limits of your home stereo system. Love it.

You get all you can handle of this band on their brand new “Ancient Torture,” a two-disc collection of their compilation tracks, vinyl- 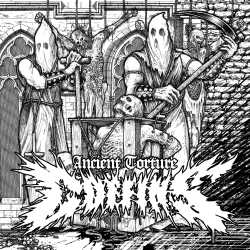 only cuts, as well as contributions to assorted split efforts alongside bands such as XXX Maniak, Lobotomized, The Arm and the Sword of a Bastard God, Cianide, Skullhog, and more. Plus, there’s sweet artwork by Mike and Mark Riddick, who you can always depend on drumming something up that’ll look awesome on a T-shirt. If you’re new to Coffins, expect burly, sooty, gritty, doomy, punishing death metal that pulls no punches and has no interest in sounding polished. This stuff reminds me of when I spent Sunday afternoons in high school trying to tune in the local college stations for their death metal matinees. Also, look for a nice scattering of cover songs on here whose original creators – Cathedral, Carnage, Asphyx, Pungent Stench, Goatlord, Venom – should be mighty proud to hear reinterpreted. Heavy, heavy shit.

For more on the band, go here: http://www.coffins.jp/

I’ll be totally honest: I have zero interest in the current goings on with Japanese experimental black metal band Sigh. I’ve essentially disliked their last few albums, and they’ve gone so beyond what I find interesting that I don’t really care what they do next. I might not even listen to their next album. Why bother? But I didn’t always feel this way about the band, and their debut record “Scorn Defeat” remains in my collection to this day (I bought the reissue Enucleation put out a few years ago). Too bad I’m now going to have to shell out money for the new double-disc treatment it’s getting, but there are bigger problems in the world.

In 1993, when this record was released, Sigh was a trio and didn’t have quite the oddness and skronkiness they do now (though there always was something a little bit different about the band). This record initially was released by Deathlike Silence, the one run by deceased Mayhem leader Euronymous, and when it surfaced, the world was really just beginning to understand the depths and power of black metal. The three who recorded this album – Satoshi Fujinami, Mirai Kawashima, and Shinichi Ishikawa – actually remain in the band to this day, but things have changed so much that what you hear on “Scorn Defeat” and what they committed on 2010’s “Scenes From Hell” bear zero resemblance. This collection contains the same production Enucleation released a few years ago (with artwork by the Riddicks), but attached is a second disc of material that contains cover songs (Venom and Mayhem) as well as demo and rough mix versions of other songs. I never get much out of demo cuts beyond an initial listen or two to see how things changed in the end, but I know some people eat up this stuff. It’s certainly worth your time both to hear how incredibly awesome this band was at one point and to get a taste of black metal’s second wave that didn’t come from Nordic minds.