There are days when getting into some philosophical exploration is fitting for the occasion, and there are days when you’re better off digging your knife right into the meat of the matter and getting under way with things already. Today’s one of those days because Castevet have returned, and their new record “Obsian” is a dark marauder here to obliterate you.

Way back in 2010 (it feels so long ago at this point), this NYC-based band emerged with their disarmingly impressive debut “Mounds of Ash,” a record released by the always reliable Profound Lore and that stood as one of that year’s biggest surprises. It was both massive and suffocating, a truly eye-opening effort from a band that seemed to have an incredible future in front of then. Then three years passed, which can feel like an eternity for underground metal releases, and they seemed to drop off the radar. Yet they come storming back with “Obsian,” a record that’s even more impressive than their debut and rams you deep into frozen outer space and alien terror. It’s a furious but also intoxicatingly well-played platter that’s both terroristic and brainy. It brings nothing that will make you feel happy inside or give you a hopeful glow, because it Castevet’s world, those would be horrible lies. Yet, It’s also a shitload of deranged fun. 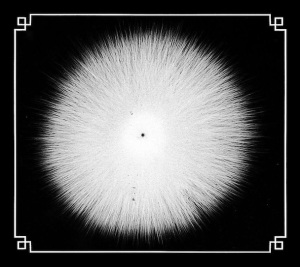 One of things that makes this new album so massive seems to have come from a major lineup change. Vocalist/guitarist Andrew Hock and drummer Ian Jacyszyn remain from the band’s origin, but joining them for this record is Nicholas McMaster on bass, who plies his trade for other heavy hitters such as Krallice and Bloody Panda and who brings a warped, cosmic, loopy sense to these songs. He’s not just there to add rhythm or a backbone; he’s there to contribute some of the most aggressive, thought-provoking work this side of, say, Geddy Lee, making his instrument as crucial as any other that helps make Castevet’s work what it is.

That’s not to suggest the other two guys were slouches before McMaster arrived, because it’s anything but the case. Hock’s roar remains a thing with which to be reckoned, a cauldron of fire that can scorch you, and his guitar playing remains violent and commanding. Jacyszyn is a steady force behind the kit, as he turns bones to powder. But together as a full unit, these three seem to have stumbled upon something almost alchemic, a formula so volatile and bubbling that it threatens to boil over and scar the world. In fact, your best bet is to tackle “Obsian” with headphones so you can hear all of these elements working together, layering on top of each other, and building to a metallic lather few other bands could achieve. It’s mind-blowing.

“The Tower” blows the fucking roof off the album, with a corrosive burst that crushes souls, and amid that punishment is some colorful prog flourishes that give a compelling edge to such agony and horror. The song is spacious but also violent, and the vocals sound like they were painful to emit. This leads right into “Cavernous,” a song with a raucous opening, harsh vocals, and the feel of a volatile science experiment gone very wrong. The song hulks into the outer edges of their creativity, and the metallic lathering is practically dizzying if you let it get that far into your head. It’s pretty sick shit. “The Curve” is aptly named, as it veers away from what comes before it. It’s just as drubbing and threatening, but in different ways, as sheets of guitar rain down, the vocals blow out as if exploding from a blast furnace, and eventually more prog-drenched madness push in mainly through the force of McMaster’s insane, rubbery playing. The close even reminds of heyday Voivod, with chilling thrashing and nuclear winter apocalypse.

“Fathomed By Beggars and Victims” gets the second half of the record off to a hazy, foggy start, letting a thick atmosphere settle in before the band drops a bomb on the whole thing, delving into thrashy verses, coarse and mean growls, and downright awesome playing. It’s hard not to get overcome by the whole thing, as it’s that infectious, and the final moments of the track feel like a lot like the spirit of late 1970s Rush. The title cut also starts drizzly and cloudy, with a bleak ambiance rising from smoking embers, and the song’s ghost floating overhead, waiting to claim your soul. The song could freeze your bones, and it seems like it’s calling on the arrival of a deep, unforgiving winter. Closer “The Sea of Severance” is a major surprise and signals some changes for the band musically. Sure, it’s crunchy and chunky and it’s violent in its own right, but when Hock opens his mouth, deep, passionate clean vocals come forth, revealing a totally different side of his expression and Castevet themselves. This feels like a more dangerous, thorny Enslaved or Ihsahn, with the band stretching their musical boundaries but never letting go of the ill intent and cataclysmic delivery, and the final few minutes of suffocating doom hammers home that point perfectly.

Castevet seem like a band that is just at the beginning of their formation, especially with the new twists and turns on the awesome “Obsian,” and I can’t wait to hear the next record, if I can be so selfish and push that far into the future. But for now, I’ll take great pleasure investigating all the nuances of this record and feel like I’m being catapulted into space so my body can be torn apart. This is one of the most creatively ambitious and disarmingly dark records of the year, one that sounds like nothing else out there now or that will come before the year dies out.

For more on the band, go here: http://www.castevet.com/