Not every record gets its just due upon initial release. There is so much music out there, and most of it runs underneath the surface, so it’s sensible that there is music that takes some time to make its mark. With a label such as Fólkvangr churning out regular releases of some of these albums, we’re bound to have dark discoveries pretty regularly.

Often concentrating on cassette versions of albums that had first life elsewhere, Fólkvangr has a strong new effort out this month that comes at you with utter depression and darkness. Suicide Forest, named after a deep wooded place in Japan known for numerous people taking their own life within its confines, will not make you feel good inside, and that’s pretty much by design. “Descend Into Despair” is a combination of the “Indifference” and “emptiness” EPs, both released last year, and this union of those two releases is a strong, albeit furiously depressing collection that’s all from the mind of sole creator A. Kruger. The songs are dark and grainy, almost like you’re hearing this thing second hand from someone who discovered an old suicide note committed to tape. That’s not a negative at all, as the cloudy sound and far-off ambiance add to the murk and authenticity of these emotions, which are raw and bleeding. 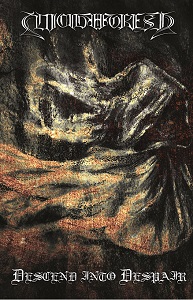 “A Declaration of Misanthropy” starts the collection with strange, ambient noise before settling into “The Embrace of Solitude,” a 10:11 challenger that has a clean start that eventually leads to the song breaking open like an egg. “Loneliness is my god!” Kruger wails, as the song crushes before going cold. The track keeps reaching as cries wrench and bruise, and then the music reveals its guts. The feeling of desolation never subsides, while clean guitars trickle, and the track bleeds way. “This Silence” has keys that feel cold and wintry, and the pace is slow and trudging. Guitars cut through, while grim growls make things uglier, and the misery is poured like generous syrup. The song feels like it’s coming to an end, but the guitars awaken and send echoes, while the vocals quiver, and melodic riffs send us to a conclusion. “A Sobering Reflection” is a shadowy interlude built with somber keys and dark melody.

“Not For a Lack of Trying…” starts the second half with stormy keys and a strange section of melody before heading into 8:52-long “Woods of Indifference” that has a clean open before heading into strong tidal wave of emotion. The pace kicks open as the drums follow, and an onslaught of synth melody gives the song a chamber feel. From there, guitars chug while harsh growls wail, and the song catapults toward a powerful ending that could floor you. “The Pain of Existence” has a crushing start, as the growls scrape, and the synth has an alien feel. The song slowly devastates, as clean and prog-fueled sections eventually give way to an elegant gust of synth that leads to one of the most unexpected moments of any metal song. A “Rick and Morty” clip from the “Rixty Minutes” episode?! It makes sense, weirdly, and then things come to a deadly end. “Sea of Glass” finishes the record with baroque-style melodies and keys bubbling, before the song comes to an end.

The band name Suicide Forest should tell you all you need, but putting on “Descend Into Despair” should only amplify those premonitions. I am not happy A. Kruger revels in such darkness, but the music he creates from that space is entrancing and something with which I can relate. Life isn’t exactly sunshine, and a band like this not only knows that but makes you live the torment through the music.

For more on the band, go here: https://www.facebook.com/SuicideForestDSBM

For more on the label, go here: https://www.facebook.com/folkvangrrecords/