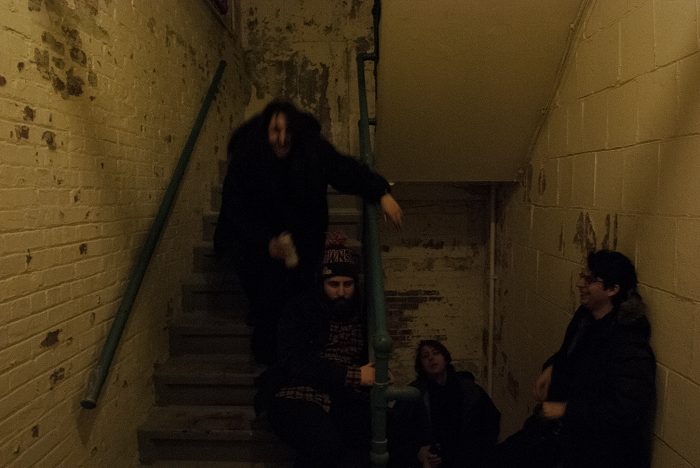 People online and … OK, mostly online, whine when anyone mentions the idea of a safe space, like the actual presence of the idea would make classic black metal melt and dissolve from history. So, fine, you want danger? You want to feel like your throat could be slit and blood spilled on the floor at any moment? We’ve got what you demand.

NYC’s Couch Slut is about as unsavory, savage, and blunt as you’re going to find. Their songs bash your face in and spread your skin across the ground because they poke at areas that are genuine and scary. Wait, did you think we were talking about people being safe at shows? No, no. We’re talking about music that actually threatens with real-life shit. The band’s debut “My Life As a Woman” was a jarring noise-rock assault that turned gender-specific roles on its rotting genitals, with an album cover that could cause the uninhibited to shriek over the sight. Now, their killer second record “Contempt” has arrived, and if anything, their knife blades are sharper, and they’re digging deeper into your wounds. The band—vocalist Megan Osztrosits, guitarist Kevin Wunderlich, bassist Kevin Hall, drummer Theo Nobel—put forth a more confrontational and metallic assault than on their debut, and every ounce feels like you could be assaulted at any moment. Lyrical content touching on anger, depression, drug abuse, depression and other very human element chokes you to the ground, and commanding Osztrosits stands over you, blood dripping from split lips, demanding to know if you’ve had enough.

The record starts with the volatile “Funeral Dyke,” where the band bulldozes over you, and Osztrosits jabs, “You’re getting excited!” Sax barrels in and blasts over the chaos, but then things get oddly melodic and palpable for anyone cowering in fear. Noise picks up again and squeals, as Osztrosits blasts, “I will fuck you, now you’re dirt,” as the song comes to a jarring end. “Company Picnic With Dust Off’ keeps the savagery rolling, letting pained wails and mortar fire riffs do their damage. The band thrashes and pulverizes, while Osztrosits drags you through psychosis that makes it feel like you’re living in an uncomfortable reality. Guitars burn again as the song ends in a blinding assault. “Penalty Scar” has guitars stabbing and a catchy tempo heading off, though Osztrosits’ stalking voice pulls you back into the danger zone. The harshness begins to feel oppressive, while guitars scratch against metal walls, holiday-style bells ring out, and everything ends in a cloud of demolition. “Snakes in the Grass” has noise piercing and Osztrosits’ voice stretching and mangling. Some lighter melodies seem to brighten the mood, but Osztrosits drops the goddamn ax, sheds blood anew, and the chaos disappears into a haze.

“Summer Smiles” sounds delightful from its title, but it’s downright disturbing and abused. Calculated drums mix in with noise squalls and guitars, as Osztrosits begins stomping and unleashing a tale that will induce panic. “He said, ‘Don’t you say a fucking word!'” she spits, as the song gets more and more unsettling as it picks up steam. Slow-driving guitars moan before everything erupts into a thrashing outburst that keeps growing louder and more intense over the last minutes of the song. “Folk Song” is a misnomer, as it’s anything but gentle and rustic. The music lights a fire that takes its time accumulating oxygen and gasping flame, as the vocals dig deeper into lifelong wounds, and the playing enters the realm of meanness. Osztrosits’ screaming gets unhinged, while the music disorients, and the track ends with some final punches. Closer “Won’t Come” is a 9:25 change of pace, at least from an emotional standpoint. The music swims in doom pools, while Osztrosits approaches the track differently, yelling her words in the background, almost like she is howling from the back of the room. The cut comes off like a pained confessional, with Osztrosits unleashing her singing voice, which is as immersive as her growls, and the final moments take to the atmosphere, bringing this gut-wrenching song to an end.

Couch Slut are real danger and madness, the type people confront every day of their lives, and “Contempt” is a record that will make your skin crawl. There is no safety for anyone here, because life’s real demons crawl out and slither toward you, set to destroy your life. This band could destroy your inhibitions, your sense of well-being, and your fragile psyche with just a single listen.

For more on the band, go here: https://www.facebook.com/couchslut/