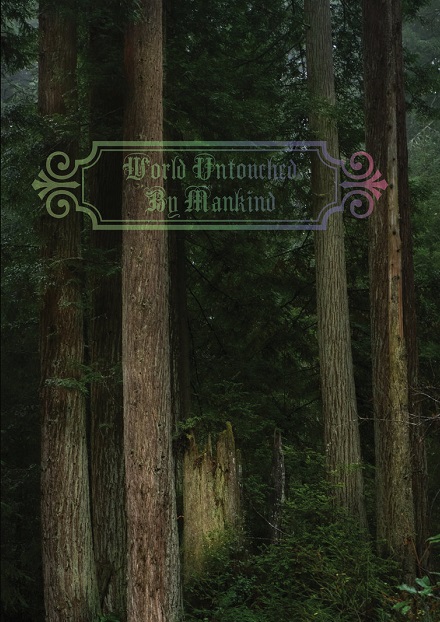 You’re swimming in a murk, unaware of your surroundings but not panicked or frightened. Instead, you’re calm and curious, as you make your way through inky waters and later into the mouth of a forest. This is an adventure, and there may be danger. But you keep on. You have to know what’s next.

That’s the feeling I get when immersing myself in “The Forests Are Old With Grief,” the first recording from World Untouched By Mankind, the ambient dungeon synth project helmed by sole member Night, also of equally strange black metal band Procer Veneficus. The music bleeds into your consciousness while absorbing these five tracks that actually were recorded a decade ago but only now were right to release into the world after they were remastered. Some of the time, these songs also feel like the dew-soaked bed of grass in which you awake after this trip you take, which can be physical or mental. Coming back to your proper surroundings may feel strange as you wonder where you’re been and how the experience will shape you going forward.

The title track starts the journey with eerie, strange synth, as sounds bubble to the surface, and we enter into a foggy fantasy world. “Beneath the Great Oak” is the longest cut at 9:05, and instantly things work their way even deeper into the mist, as melodies swirl and enrapture, and a weird coldness spreads over your body like the amalgamation of spirits. The track turns both woodsy and cosmic, feeling like a soundtrack to a dusty old B sci-fi or horror film, as its grip slowly releases you.

“The Earth Shall Be My Grave” has deep, chiming keys starting off, with laser lines cutting through, and the tempo plodding gently and spookily. The synth has an orchestral feel as it builds, with keys plinking like freezing rain, and the song fading out into mystery. “Cold Caverns of Time” has psyche melodies boiling, as organs swell in a pastoral manner, sending chills down your spine. You head will be floating in a medicine dream, while the pace swelters, and the thing spills into a haunting grave. Closer “Those Who Watched As the World Fell Silent” has passages that feel like they’ve stretched through the entire record and only revealed themselves now. A space haze arrives, as we swirl through a dreams scape, and sounds that remind of an airplane engine add a droning paralysis. The back end of the song feels like it plods through time, with the strangeness building and quietly fading away.

World Untouched By Mankind is a project that isn’t going to move everyone, but those who connect with “The Forests Are Old With Grief” are likely to digest the adventure we mentioned in the opening. You don’t have to travel in your mind to appreciate what’s going on here, but it sure enhances the record. Not sure what future this project has, if any, but this record is here right now to add a layer of experiential wonder unavailable on any body of music elsewhere in the world.

For more on the band and to buy the album, go here: https://pacificthrenodies.bandcamp.com/album/the-forests-are-old-with-grief