What better way to go into a weekend than with a bludgeoning serving of death metal served up by a fairly mysterious new band from one of the hot beds of this style of music in the United States? This isn’t really telling you a lot, I know, and once you’re done reading this, you won’t know much more about the band than what their punishing first record sounds like.

Before the arrival of Noctambulist’s debut record “Atmosphere of Desolation” arrived in my email, the only thing I or most people knew about them was the one song they had released on their own Bandcamp page. That’s about it. Hard to get too worked up about what was to come on this six-track effort, but it didn’t take long after ripping into this music to discover the Rocky Mountain area is rife with this mind-altering, devastating death metal that makes you feel like you’re being chewed by a combine while your mind wanders outer space. Released by Blood Harvest Records along with Helter Skelter Productions, this blood-soaked, artistically aggressive collection comes your way in just a couple weeks’ time, so you have opportunity to adjust yourself for another death metal band that wants to push this style even further as far as ferocity and creativity are concerned. The initialed band members—vocalist S.M., guitarist A.T., bassist R.H., drummer M.N—deliver this album with earth-quaking intensity, and each visit with the music is another round in the fighting pit as you try to keep your head above the fray. 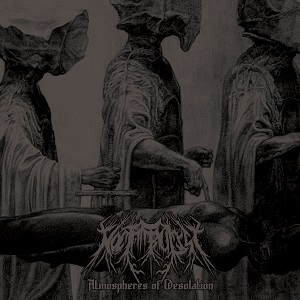 “Dimming Lights Illuminate” is a quick opener that dwells in doomy chaos as vicious wails are unleashed, sounds hang in the air, and the madness is swallowed by the dark. “Abnegation” starts in grinding death, as the fury builds its intensity, growls gurgle, and the playing smears soot and blood. The growls get more monstrous while the playing swelters, giving off thick humidity before fading into mystery. The cut is mucky and punishing, getting tricky and making your mind work overtime, while the band even digs into some hardcore-style lashing. The growls penetrate before the song goes clean and cold, conjuring fog before ramping back up, with shrieky vocals inducing fear. The noise sizzles, the growls pummel you, and the track dissolves into a noise bath.

“Jubilant Cataclisym” has gurgling growls bubbling under the surface before savagery erupts in whole, and heavy storming begins to chew up the surface. Guitars jar while layers of filth are laid down, only to have atmosphere emerge from behind the blazes before washing out in a dark haze. “Denial of Autonomy” is an immediate burst as it lurches and crushes like a beast, with smothering chaos slicing through bone, and wild screams piercing your hearing. The track melts into calm for a stretch before cymbals crash, riffs crawl, and the track ends in a devastating blast. “Habitual Falsehood” ends the record by bleeding in and launching grisly growls as the tempo blisters the body, guitars spiral, and the drums utterly destroy. The guitars slash away, while the ground rumbles underneath you, the pace thickens dangerously, and the song loosens its stranglehold as it disappears into the night.

2018 was a banner year for great death metal, and Noctambulist are making sure that momentum kicks into the new year on the strength of “Atmosphere of Desolation.” This is a record that wastes little time putting the boots to you, and throughout the meaty six songs, you’re in for a clash from which you won’t soon recover. Yet, there’s something more, elements buried deeper in the music that go beyond mere skullduggery, and it’ll take multiple visits for you to unearth each layer buried beneath the surface.

For more on the band, go here: https://www.facebook.com/noctambulist303/

For more on the label, go here: http://www.helterskelterproductions.se/