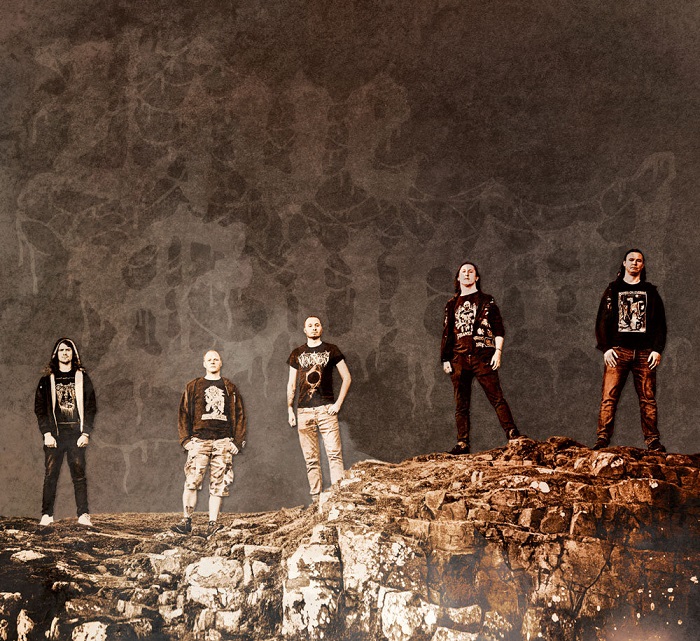 The times are grim. I’m looking forward to when I don’t have to keep opening stories that way, but what can you do right now? Dank and foreboding sounds always are welcome around here, but it feels so much darker now, and the shadows appear that much more tangible.

UK death metal squadron Live Burial could not have picked a more fitting time to return with their second record “Unending Futility,” itself a morbid on-the-nose title there’s no way they could have realized would carry this much weight. But putting aside all of the vibes of pestilence and misery for a second, this record sounds like a million bucks, as the band carves through seven songs in 41 minutes, making good use of their razor-sharp playing and penchant for bashing you. The band –vocalist Jamie Brown, guitarists Rob Hindmarsh and Richard Codling, bassist Lee Anderson, drummer Matthew Henderson—follows up 2016’s “Forced Back to Life” by unloading thrashier moments and some ridiculous bass work onto a record that brings strains of bands such as Asphyx, but don’t discount the times where they seem to be trying to take what Death did to the next level. It’s an impressive album.

“Seeping into the Earth” gets off to a doomy start before death arrives and begins mauling as screamed howls send charges. The weight and fury of the track begin to push back as a solo tears through the void, ripping things apart. That’s followed by decimating drumming and insane bass loops before the track bows out. “Condemned to the Boats” is gut ripping and speedy at the front, while howled vocals destroy, and the guitars hammer away. The bass playing again sets up like an alien looking for blood while a powerful solo explodes, and guttural growls help feed a fire that grows out of control. “Swing of the Pendulum” unleashes smeary riffs and vocals that cut through bone, and then speed strikes and jars away anything hanging by a thread. Doom again becomes part of the picture while the guitars let loose and crush, followed by sharp vocals. Pain rains down generously as the track comes to a mashing end.

“The Crypt of Slumbering Madness” slowly enters the room and sends chills, letting the momentum gain steam and the bass set up shop. The band starts to throw hammer shots as fires rage out of control, and shrieky vocals makes their way toward your veins. The drums are outright assaulted, and smothering hell leads the track to its end. “Rotting on the Rope” unfurls riffs and heavy storming, leading to a punishing assault that tangles your brain cables. Ferocious vocals add their fingerprints, pushing pain and madness into the scene where it rains down hard and utterly soaks the ground. “Winds of Solace” is a quick instrumental piece that combines acoustic guitars and echoed drums, setting the stage for mammoth closer “Cemetery Fog” that starts in slow-driving mode before the attack begins. The music rages hard as vocals punch you in the gut, and the band lurches into the mud. The soloing takes off toward the stars, returning in the midst of barbaric hell that clobbers wholly. The final growls chew at your nerves, the band puts boots to throats, and the strange bass playing sends final coils of pain.

Now’s the time for suffocating, riveting death metal, and Live Burial deliver that in spades on “Unending Futility.” We’re in a very rich period when it comes to having access to a lot of great death, and this band and record only serve to amplify that. Now’s the time to feel bad, wallow, and let misery have its way with you, which will be even more enjoyable while “Unending Futility” is destroying your hearing.

For more on the band, go here: https://www.facebook.com/LiveBurial