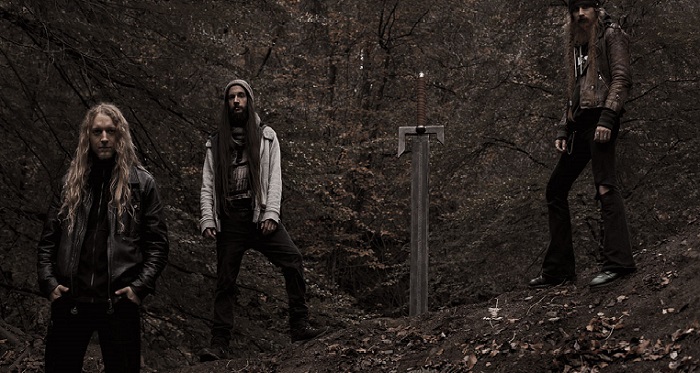 I wonder sometimes if I didn’t do this site how many bands I’d never learn about or eventually run into that end up being favorites of mine. There’s so much shit out there in every possible sub-genre that there are incredible bands bubbling beneath the surface that a lot of people never find just because the amount of content can be overwhelming.

If you haven’t run into German doom squad Eremit yet, do yourself a favor and change that right now. A strong gateway to their wares is new two-track EP “Desert of Ghouls,” an effort that still runs a healthy 21:12, which is longer by a few minutes than a full-length record we’ll discuss tomorrow. It’s their first music since 2018 debut “Carrier of Weight,” and portioned in a sense that you won’t overindulge (doom records tend to be long) and get just enough nourishment to keep you going. The band—vocalist/guitarist Moritz Fabian, guitarist Pascal Sommer, drummer Marco Backer—adds a lot of their own DNA into the catastrophic doom so that they carry the banner, but they do it in their own way. This is a band that needs more exposure because they’re bound to find a ravenous audience. 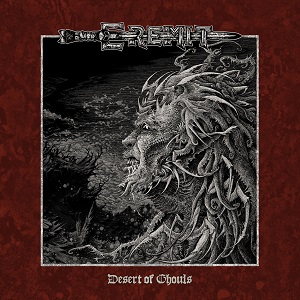 “Beheading the Innumerous” opens the record with fuzz and chugging, as the playing drubs you numbly. Fabian’s grimy growls maul with menace aforethought, as the playing drills hammers into the flesh, landing impossibly heavy blows. As the track moves on, it switches paces into doomy trauma with the playing leaving heavy bruising, Fabian wailing, “Death will reign now,” and the song swaggering closed, capping off a mashing 8:57. “City of Râsh-il-nûm” is the 12:14-long closer that starts with drums crumbling open and the music swimming through psychosis. The track slowly sinks into dark waters while the track gets thorny and the guitars burn brightly. Growls hammer through while the playing gets burlier, stampeding as Fabian howls about the “city of light, city made of stone.” The bass charges up while the track rips open at the seams, gaining intensity as raspy cries mash away. The sinister playing begins to hit its threshold while the boiling slows, the music crashes to the shores, and everything bleeds into an insect swarm of noise.

Eremit’s thick doom here feels close to what they accomplished on their 2018 debut record “Carrier of Weight,” but with an eye toward their future and what that holds. “Desert of Ghouls” is an ideal introduction to anyone who has yet to familiarize themselves with this band so they can get a quick taste of what they do. This is monstrous doom metal that seeks to punish and leaves you basking in the midst of one of the sub-genre’s brighter new celestial bodies.

For more on the band, go here: https://www.facebook.com/EremitDoom