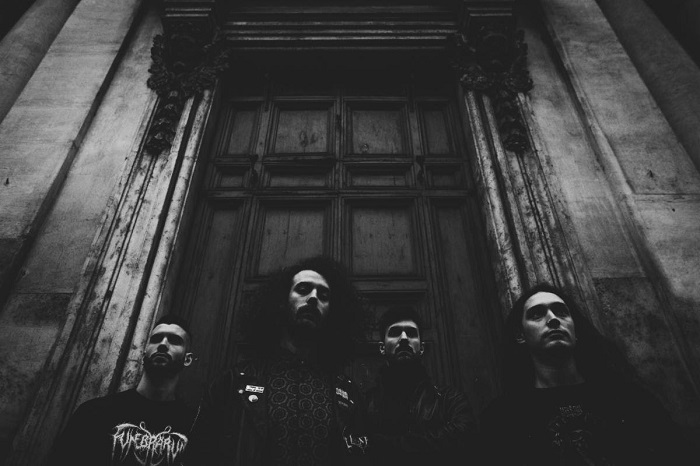 Absolute fucking weirdness is the only way I can think to describe a band called Bedsore, which I assumed before digging in was going to deliver disgusting, gross-out death metal. Because, did you ever see a bed sore? They’re disgusting, and they apparently hurt pretty badly, though to this point I’m pretty happy I don’t actually know about it.

The Italian death metal band has their debut record “Hypnagogic Hallucinations” coming out on the mighty 20 Buck Spin, that label’s first singing from that country, and it’s a mind eraser. Yeah, it’s not a disgusting record at all and instead is one that will tap into your brain and slowly work its way into your skull’s machination. It’s kind of insane that this is their debut since it’s so sophisticated and mesmerizing in a way that hints at a band at this much longer their time together (their 2018 demo is what alerted the label to their strange ways). The band—Jacopo Gianmaria Pepe (vocals, guitars, synths), Stefano Allegretti (vocals, guitars, organ, keyboards), Giulio Rimoli (bass), Davide Itri (drums)—is compelling from the start and once the entire record unfolds, if you’re like me, you’re instantly pulled into their unreal psychosis that never, ever relents. 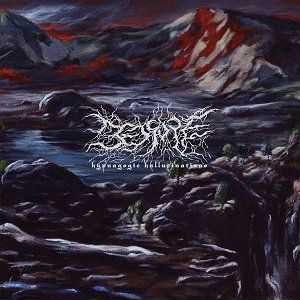 “The Gate, Disclosure (Intro)” opens the record with organs sweltering and the drums awakening before a synth fog hovers over the area. Things feel proggy and weird before elegant guitars unfurl, and we float into a psychedelic dream and toward “The Gate, Closure (Sarcoptes Obitus)” where guitars heat up and enter a death spiral. Wild screams erupt as the playing begins to slash, while the leads take off, meeting up with grisly howls. A trickling pool emerges as the music bleeds off into a mind-tingling aura. “Deathgazer” has riffs electrifying as the tempo stomps guts, and the playing stymies. Animalistic howls jab into your sides while the pace chews up again, leads boil and moisten your skin, and then things start to rip apart again before ending abruptly. “At The Mountains of Madness” is the longest track, running 8:57 and dripping in slowly as a thick mist develops. Suddenly, the song comes to life with chugging guitars, banshee howls, and then the playing speeding up into a hypnotic section that leaves your mind in a tailspin. The song punches back in as the vocals tunnel toward your soul as fluid soloing swims toward a mind-altering corner that eventually gives off bluesy streaks as the song disappears into the night.

“Cauliflower Growth” trudges in death as things drip into the murk, and that turns toward a sludgy path downhill. Strong soloing fills the air and gives off warm colors before the vocals become unhinged, and that keeps the fires going until the intensity levels off, clean guitars melt, and everything drains away. “Disembowelment of the Souls (Tabanidae)” aggravates blues strains again, floating your head, then guitars burn, and the screams become acidic. The playing feels like a slow-droning crash for a stretch as guitars light up again, and the ground rumbles. Hypnosis is something of a theme in Bedsore’s music, and that rears its head toward the end of the track, creating a soothing chill and a gateway to closer “Brains on the Tarmac.” Things begin reflectively as cold guitars slowly awaken into a dark noir as things gallop open, and maniacal devastation sets its trap. Insane playing shoves into shadowy darkness, throwing shrapnel before calm reaches in, flowing toward ominous nightmare terrain which pays off when the band hits muddy chaos again. The pace explodes while the howls mar brain impulses, with the track crashing landing closed.

It’s easy to get caught up in Bedsore’s strangeness and psychotic visions, but don’t let that divert you from how deadly their playing is, and how strong these dream-like death blasts are from start to finish. “Hypnagogic Hallucinations” is a mentally punishing record, an incredibly stellar debut album from these Italian beasts that’ll play over and over in your end. This is an adventurous, psychologically stimulating record that’s going to be a blast to investigate on subsequent visits.

For more on the band, go here: https://www.facebook.com/bedsoredeath