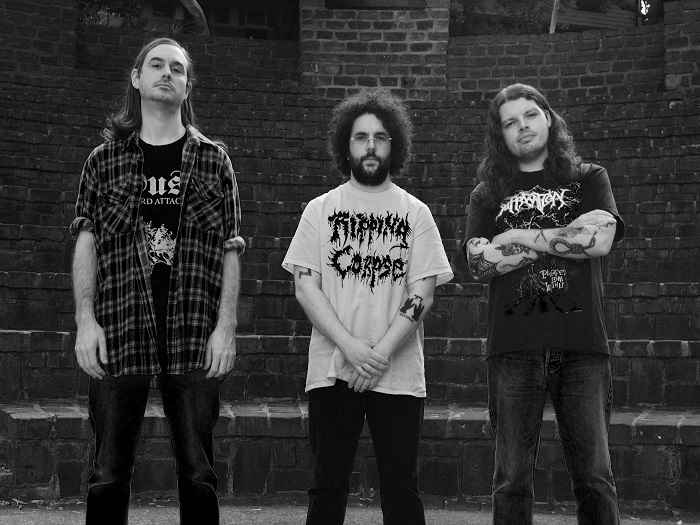 Stop me if you’ve heard the whole thing about there being an insane amount of death metal bands and records, and wading through them to find the ones worthwhile can be a chore. I’d imagine it’s harder for a listener than a writer, because I pretty much have every release at my disposal, so I have the opportunity to find what I like. I guess good luck to the rest of you?

Anyway, Aussie trio Faceless Burial indeed create the good stuff, and they do again on their mind-splattering second record “Speciation.” Hey, it’s Australia again, a land that has produced a ridiculous amount of darkness as of late, and Faceless Burial definitely fall into that mix. But that’s not all that’s going on here. While the band—vocalist/bassist Alex Macfarlane, guitarist Füj, drummer Max Kohane—has their tentacles wrapped around classic death and its tenets, they also have an adventurous nature about them, a creativity that is, gasp, fun. They have progressive tendencies, but in a way that injects a strange alien DNA and never delves into being brainiacs just trying to impress themselves. 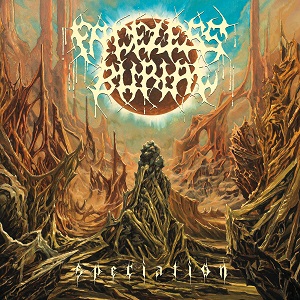 “Worship” gets the record off to a gritty start as the growls bubble up and the leads warm as the pace lurches along. The track is punchy and mashing while the lead shatter glass, and the playing gets ugly, carving a bloody path. Guitars shift as the playing rumbles, getting tricky and proggy before turning thrashy. “Limbic Infirmary” is muddy and crushing as nasty growls penetrate before things speed up dangerously. Guitars sweep while the playing erodes, thickening and giving off a hellish feel. Cooler leads melt into the picture before the playing begins to swagger heavily, blistering and leaving heavy bruising that’ll need an icing. “Irreparably Corpsed” pounds away with utterly relentless intensity as the guitars swelter, with the leads carving away. That pressure never relents once as it smears psychologically before coming to a brutal finish.

The title track spews lava from the start as the leads glow and the vocals stomp through mud and rock. It’s clobbering and heavy, pure death metal filth shoved into your mouth, where you’re forced to chew. The track hits the gas pedal and bashes punishingly while the soloing opens up and soars, slamming closed in a burst of colors. “Spuming Catarrhal Gruel” crushes and thrashes from the start as melody jolts, and the playing hammers bones. Drums splatter as the guitar work cuts through, allowing the soloing to ignite and the proggy madness flow. The track races around, mangling senses before finally bringing mercy. “Ravished to the Unknown” closes the album and unleashes pure savagery, with the drumming delivering thunder. A massacre ignites as the guitars explode with rage, numbing the mind and going into thrashy chaos. The guitar work freezes the flesh with the track fading into a haze of static.

Faceless Burial have their roots in classic death metal for sure, but they also inject progressive spirit and a strange creativity that helps “Speciation” rise among the endless glut of music in this sub-genre. On just their second record, they’re incredibly confident and absolutely devastating on this six-track display, one that’s just enough of a serving to satisfy but not overfeed. This band has a rock-solid formula, and that’s all over this blood-thirsty sophomore record.

For more on the band, go here: https://www.facebook.com/facelessburial/