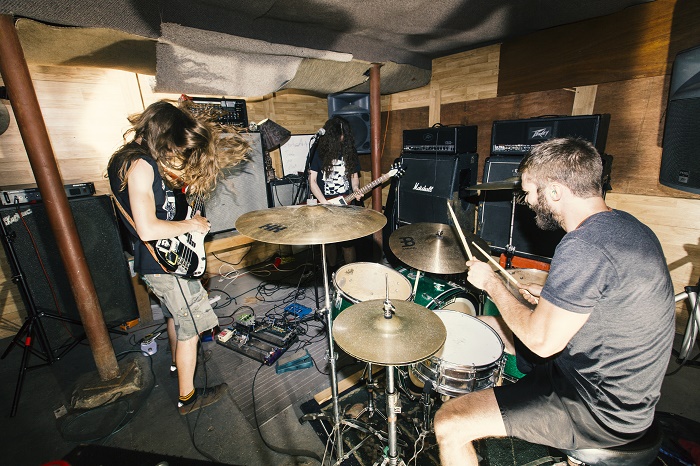 One of the most satisfying experiences as a music listener is when you get a new record from a band you follow and are blown away instantly by the amount of improvement they display. I mean, you’ve always liked said band, and their music is in pretty steady rotation, but then they take shit to another level.

Chicago thrashers Oozing Wound always had a tongue sticking through their nuclear wasted-cheeks on their records, not that they didn’t take their craft seriously. But there always was a thing about them that you could take them as a band that hit hard but didn’t seem all that worried about being placed in the upper echelon of their sub-genre. All that shit’s out the window on the band’s tumultuous third record “Whatever Forever,” an album that, from its title, sounds like things are just going to be heavy and fun. And they are. But there is so much more substance this time around. The music is heavier, their teeth are sharper and out for blood, and they just sound outright dangerous. Oozing Wound never have sounded this deadly, and this record will force anyone who didn’t pay mind to these guys before to wake the fuck up. Now. 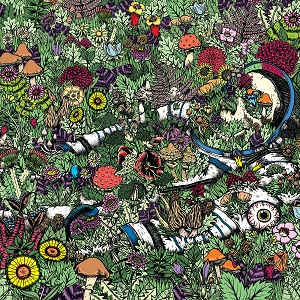 The funny thing about Oozing Wound, and maybe this is a reason we like them so much, as that even though I spent two graphs imploring you to take this band seriously, they totally don’t seem themselves that way. Yeah, records such as “Retrash” and “Earth Suck” were trustworthy thrashers, but these guys sounded eternally loose. The band—vocalist/guitarist Zack Weil, bassist Kevin Cribbin, drummer Casey Marnocha—hits on serious themes (climate change denial, death of loved ones) and not-so-vital ones (an ode to a movie not even made yet, Deep Space Nine), yet all the while they sound violent, urgent, and completely confident. Oozing Wound may scoff at the maturity or vast improvement accusations, but I sure hear it, and this band is a potent as they’ve ever been.

The record tears open with “Rambo 5 (Pre-Emptive Strike),” the best theme song ever for a movie you never saw. The track jolts to life with heavy riffs, punchy tempos, and outright maniacal howls that gnaw away at your senses. The track is heavy as hell and ends in a pit of demolition. “Diver” has a boatload of great riffs, as the intensity of this song is obvious. The guitars spiral all over, causing vertigo, and the vocals scrape at your skin, driving blood to the surface. Melody floods in later, the soloing scorches, and noise swells at the end. “Deep Space” feels like hurtling past the stars, as the song decimates alongside the wild howls. The soloing goes off the rails and spills chaos, while the pace mashes away and ends in a pit of doom. “Mercury in Retrograde” is the second-longest cut here at 7:38, and it starts with hypnotic riffs, jarring drumming, and wails of, “Feeling like a skeleton!” poking at superficial wounds. Melodies loop and catch up with drone, while the band hits a long, purposely repetitive track designed to test your patience and mock you. Then speed returns, and we all burn to death. “Weather Tamer” takes rightful aim at dickhead Sen. Jim Inhofe, R-Oklahoma, and his harebrained attempt to disprove climate change. Wow. What a schmuck. Anyway, this is the longest cut at 8:11, and they dump noise, cool riffs, and a tricky and proggy section in order to explain this madness. There are parts that are trancey, sections that are spacey, and more melodies repeated over and over again, hammering home insanity.

“Everything Sucks, And My Life Is a Lie” practically overflows with sarcasm, but in the catchiest, most destructive way possible. The riffs absolutely chug, while the vocals are yowled hard, opening up and congealing wounds you may have. The soloing absolutely glimmers, while the ending comes to a raucous neck-jerk, with the drums going absolutely off. “Eruptor” is the first of two instrumentals, this one built on speedy playing, melody loops, and a pace that makes your head spin forever. “Tachycardia” has a bit of a stoner vibe to it, as the riffs spill, the vocals are barked, and the guitar work turns deliriously playful. Later on, every element unleashes pounding and torment, bringing everything to a meaty end. “You Owe Me, Iommi” has a very obvious target, and this instrumental spends its short running time mixing clean guitars into cosmic weirdness and relentless gong smashes. Closer “Sky Creep” remembers fallen cosmonaut Vladimir Komarov (a Google search for the image of his remains isn’t, like, lemon party bad, but it’s not fun) who died on the Soyuz 1 after re-entry to Earth. The song seems to be paced like his death, as the track speeds in terrifying manner toward the ground, the playing is stabbing and painful, and the vocals are pained howls. The track finally ends in thick, poisonous exhaust, with crazed yells and screams that are only too apropos for the subject matter.

Oozing Wound already were a bad-ass thrash band before “Whatever Forever,” but now they’re a force with which to be reckoned. You like some Exodus, Vektor, Municipal Waste, and even Early Man? Then this band is going to pulverize your body and leave you a pile of sizzling goo. You’ll be better off that way. Trust us.

For more on the band, go here: https://www.facebook.com/oozingwound

For more on the label, go here: http://thrilljockey.com/