It’s as good a time as any to be a fan of the vinyl medium. Just about everything gets released in that form these days, which makes it easy to fill your shelf. On top of that, many recordings from the past that either never got the treatment or long sold out are getting new life from a release in that format.

These next two days, we’re going to look at a pair of records that finally can be yours and haunt your record players for years to come. Today, we focus on “Strange Rites,” the only long player in the history of Pittsburgh death metal institution Abysme. Their name has dotted plenty of killer multi-band bills across the city, not to mention when they hold their very own beatings, and their sound and style really are summed up perfectly by the album title. Originally, this album was released by Hellthrasher back in 2012, but now Pittsburgh-based label Our Ancient Future is bringing this back into the mix on a 12” vinyl release that sounds great and should expose this awesome record to more people. If you like your death muddy and bloody, without an ounce of bullshit, then you need Abysme in your life. 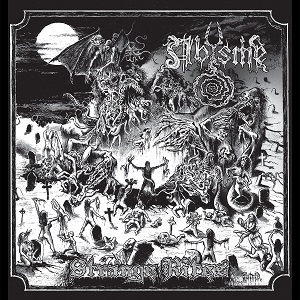 Abysme have been doing their thing for a decade now, drumming up horrific, gut-wrenching death metal that rolls around in the doom tar pits enough to make their music hold onto the filth with all its might. The ranks consist of guitarist/vocalist Brad Heiple (formerly of Funerus), bassist Mike Bolam (formerly of Crucial Unit, Warzone Womyn, and Necrolysis), and drummer Timothy R. Williams (formerly of Alpha Control Group, Human Investment), and they mete out channeled, furious destruction on this 10-track, 34-minute record that is paced perfectly and comes in an ideal serving. I’m a walking cliché now when I mention music that goes perfectly for the dead of autumn, when all life decays, but whatever. Abysme fits the bill perfectly, as their might goes well with the chill.

The record rips open with “Scribbled in Dust,” with weird noise hanging overhead, grinding death, and the guitars going off. The track gets uglier as it goes on, with Heiple gurgling, “Are you a monster or are you death?” as the track rumbles away. “Beyond the Seventh Door” is a brutal assault, mashing away at your senses, as guttural growls mix with ferocity and bloody your knuckles. “Formless” has a smudgy pace, taking its time to blast away, with downtuned muck and ugly growls. “Formless, nebulous,” Heiple wails, as the slow-driving pace applies the pressure, and the soloing erupts and burns away. “Annihilated Memory” also simmers in slow-charging terror before the pace rips apart and begins destroying everything. Another mad burst arrives near the song’s end, dealing another heavy dose of punishment. “Gift to the Gods” shows off a little in a Morbid Angel-style unleashing, as the song thrashes hard, the drums clobber, and guitar lines get tangled up, causing the noose to tighten.

“We Shall Sleep” is relentless from the start, as the band unloads a feasting of punishment. The brain is battered inside the skull to near concussive levels, while the pace then rolls in the mud, as putrid growls and blistering misery take over. “Terminal Delirium” has a raucous start, with the tempo picking up as the song goes, never holding back on its mission. The back end is grisly and monstrous, coming to a sudden, abrupt end. “The Third Day” churns and gives off steam, as the drumming leaves bruises, and the track slips into doomy hypnotics. The darkness of the track is apparent, but never more so than when Heiple wails, “Submerged in futility, and heaven mocks above the dark deep.” “Fallen Colossus” bleeds into the picture as blasts arrive, followed by mean riffs that spread horror. The bulk of the song is rough around the edges and thrashy, leading to a raspy, sore finish. Closer “Remarkable Conqueror” explodes, with a pulverizing charge and the vocals delivered from a heaving chest. As the song nears its final resting place, the pace slows, noise spreads its wings, and fierce drum strikes end the assault.

I know I’m excited to have “Strange Rites” on my LP shelf, and anyone who has followed Abysme through the years, or who appreciates honestly gruesome death metal, should be equally as pleased. This band has been doing good things for a long damn time now, and hopefully even more ears will be reached outside the city limits with this vinyl edition. As long as there continue to be bands such as Abysme, the true, rotting underground of death metal will slither long into the future, spreading blood and puss all along its path.

For more on the band, go here: https://www.facebook.com/abysme

For more on the label, go here: https://www.ourancientfuture.com/00