There’s a richness in the music that comes from the Western parts of the United States. The real stuff, not the music that’s been captured and defaced by pop culture and what passes as the bulk of modern country music. Those who get it right cut right to the heart with art that feels like it should be splashed with dusk colors, strange noir, and a spiritual richness.

Denver-based black metal band Wayfarer bask in the very hues of their homeland and blend that into their sound. On their third record “World’s Blood,” their first for Profound Lore after having their first two issued by Prosthetic, the band even expands beyond their original sounds and push into sludge and atmospheric doom, albeit in small doses. The band—bassist/vocalist Jamie Hansen, guitarists Shane McCarthy and Joey Truscelli, and drummer Isaac Faulk—digs deep into their Denver roots and the suddenly bustling metallic pools that have gathered in that area, and they also pay homage to those whose footsteps once marked their corner of the earth, only to be forgotten by so many. The music here flows like tributaries of oranges and purples poured down darkened mountainsides, and their destructive strikes and that rage out of shadowy sections give the music a light/dark feeling that cuts to the core and splashes you with a gamut of emotions. It feels like a burnt portrait of the West. 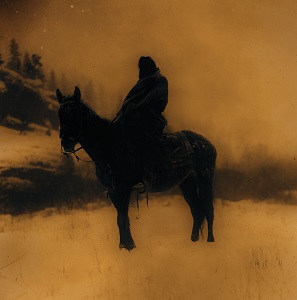 “Animal Crown” kicks off the record with guitars echoing off in the distance before things stomp to life. Hansen’s hauled vocals combined with strong riffs push the thing forward, while the weight of the song causes pressure cracks. Later we hit a breezy calm, but that’s temporary with the assault that follows. The track rolls in atmosphere, with blood-curdling shrieks punching in before the cut’s abrupt end. “On Horseback They Carried Thunder” is the longest track, clocking in at 13:12. Initial serenity builds into gazey clouds that mar vision, and then that bursts into a full storm. A post-metal approach beckons, with growls rushing and your ribcage threatening to rupture. The guitars lead through the dust, as the track gets richer and moodier, and the drums rupture blood vessels. Later, the song goes cold and clean, washing the dirt away, before the assault begins anew. Shrieks and growls mix and maul, with the band hammering the rest of the way home.

“The Crows Ahead Cry War” pokes open and rambles through the mud and slowly increases the pace before we’re full blown into a vicious power surge. The tumult is mixed with some calm, chilling passages, and before long, the track explodes, and riffs are firing madly. The pace shakes the earth, as Hansen shrieks viciously before the song gets spacey and atmospheric, slowly fading out. “The Dreaming Plane” has a murky start, as inky strangeness passes into the water. The guitars sting and rupture, with the band heading a bit into sludgier terrain, and the vocals leaving a path of devastation. The band eases back into tranquility, letting the fog coverage arrive, and the song trickle gently. As expected, the explosion strikes, with the melodies leaving you disoriented, and the track heading out on an icy note. Closer “A Nation of Immigrants” is a mostly rustic acoustic number with clean singing buried under the surface, and a sense of homage being paid to those who first honed the land. Female singing can be heard under the din, while guitars moan, a dusty spirit rides, and the track dissolves into the earth.

Wayfarer have been putting their own touch on American black metal for the past seven years now, and they burst even further out of the crust and make their sound even more gigantic on “World’s Blood.” It’s easy to feel like you’re walking into the heart of a dust storm or the clutches of early evening as the sun sets during this record, and being able to slip into those moods makes this music even deeper. This isn’t black metal that dines on blood and guts; it’s an expression of their portion of America and the ghosts that helped etch history.

For more on the band, go here: https://www.facebook.com/wayfarercolorado/