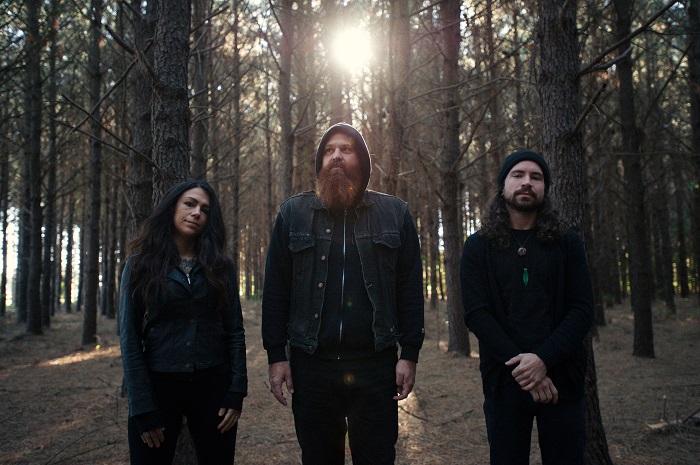 I often wonder where the darkness and shadows come from when hearing doom metal. I imagine the answer is limitless, as artists pull from so many dank corners when creating their art. Often times, the answer is that it’s culled from personal chaos or the disorder they see in the world, but other times, it’s from something quite different.

Dana Helmuth, long of Maryland doom pounders Blood Raven, got to work in his new project Yatra while living a fairly primitive life, at least as most people would consider it. Moving into a cottage in the woods with no plumbing amenities and relegated to using outhouses and outdoor showers, Helmuth was able to find solace in the peace and lack of technological intrusion and come up with the eight tracks for the band’s debut album “Death Ritual” in about a month’s time. Joined by a rhythm section of bassist Maria Geisbert and drummer Mike Tull, the band started to push into a psychological, smoke-filled excursion (the band’s name is taken from the word used to symbolize a journey that Helmuth learned while motorcycling through Nepal and the Himalayas), and from first moment to last, you’ll feel like you’re journeying through strange clouds with them, mind altered no doubt. As for their sound, imagine a gnarlier, more prehistoric version of Sleep, and you’ll be headed down the right path, one you should take for sure.

“Hour of the Dragon” kicks off the record as it bleeds into a psychedelic haze before riffs kick in a deliver swagger. Helmuth’s vocals bark and sound, fittingly, as primitive as their surroundings, while the soloing chars, giving off a stoner vibe. The final moments are druggy and ugly before heading off into the darkness. “Black Moon” follows, as it has an eerie beginning before riffs slither and deliver a bluesy punch. Fuzzy doom emerges amid gruff singing that scrapes raw skin, situated in a fog before soloing bubbles to the surface, taking on Matt Pike-style muscle. Growls crawl back in before the song heads out in a blues-filled vapor. “Sacred Flower” kicks off with a simmering bong hit before the riffs burst, the vocals rip off faster, and the track makes you feel high AF, which is likely the intent. The track slams harder as it goes, with the leads rising, Helmuth wailing, “Rise up higher!” and the track dissolving into dust. “Snakes in the Temple” emerges slowly, with the vocals rolling in, and the vibe giving off a nasty feel. Soloing injects pain, as psyche blazes are set, torching a trail in front of it. Geisbert’s bass entrances, while the chorus returns, and everything comes to a volcanic end.

“Smoke Is Rising” is trippy as hell, with Helmuth’s voice coming off in yelps, later declaring, “Kingdoms, they fall into the sea.” The riffs slowly batter, while fuzzy guitar work forms clouds around your brain, paving the way for the growls to come in and clobber you, leading toward a slow descent to hell. “Four Directions” simmers in sitar drone before riffs begin to crunch, grimy vox are smeared over the chorus, and the guitars light up and surge, causing you to shield your eyes as you’re led toward the exit. “Mighty Arrows” sets up camp deliberately, as burly riffs flex their arms, and Helmuth barks, “Strike down the serpents!” Soloing gives off noxious fumes, crushing bodies slowly in its wake, adding layers of murk, with the track coming to a stomping end. “Sailing On” ends the record with agitating riffs and savage growls storming the gates. An acidic tempo swells, as the song drubs slowly, with the swagger pushing back into the picture. The leads catch fire anew, bringing the track to a filthy finish.

Yatra’s journey is just beginning with “Death Ritual,” and these first steps are spellbinding and spacious, a means to helping you reach out from a psychedelic watch into something entirely different. There will be comfort for those in the stoner doom realms as to what they’ll find here, but even if that’s not your thing primarily, you’ll likely be lulled in by the riffs and the filth. This is a promising first burst for this band that, while just offering their debut, feel like they come at you with ages of wisdom to impart.

For more on the band, go here: https://www.facebook.com/yatradoom

For more on the label, go here: http://www.grimoirerecords.com/