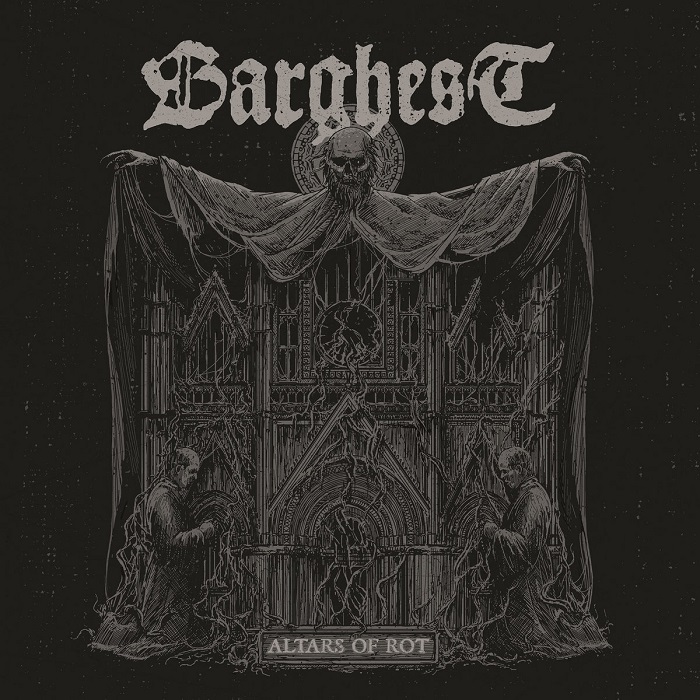 What a year to feel shitty and full of spite. Just about every possible power structure has failed us, which is no surprise at all, and other members of the human race have found a stage to act like repulsive, mindless creatures with no concerns beyond their own disgusting bodies. What a wonderful time to be a human being.

Speaking of hatred and nausea for every fiber of existence, Barghest have returned with “Altars of Rot,” a fresh slab of death and black metal that will continue to rot you to the core. It’ll get in and add a level of blackness to any part of you that still has humanity remaining. That all sounds nasty and devoid of hope, and it is, but there’s also something fruitful to finding art that feels as miserable as you do inside and disappearing into the maw. On this, their third full-length and first since 2014’s “The Virtuous Purge,” everything is up for ruthless judgment, with no one offered a hint of mercy. The band—vocalist/bassist Troy Bennett, guitarist/vocalist Dallas Smith, guitarist Jason Thorning, drummer Max Kimmons—sound as savage and bloodthirsty as ever, turning in seven songs over nearly 33 minutes that wreck your soul and light fires of rage and revenge.

“Extinction Dialogue” explodes with mauling death as the vocals carve through, and the playing catches speed. “Shame is not armor that protects you from the woes at hand, blame is not a weapon with which to lash out at a weakly man,” Bennett wails as the track kicks into high gear, the leads cut through, and the track ends in bloody chunks. “Negative Forms” explodes with tricky riffs and the vocals tearing away before things get into a skull-mashing tempo. Black metal-style melodies melt away and flood with blood while Bennett ‘s vocals come unglued, and the track blasts into delirium. “The Pious (The Poisoned)” is a punisher that has filthy riffs and vicious growls, as the guitars fill the air with tension. “Sworn to uphold the vile words of men pretending to be gods, empty and weak and hollow, taking from the peasants of tomorrow,” Bennett wails while the drum work clobbers, guitars catch fire, and the track comes to a blinding end in hatred and filth.

“Ferinus Vis” punishes and erases whatever data your mind is holding onto as a violent pace and thunderous riffs arrive. The playing smothers as it curves into hell, growing completely unhinged as the guitars burn off into the murk. “Nomadic Plague” is … timely delivered in this diseased year of 2020, at least as far as the title is concerned. The playing is thrashy and channeled as the shrieks rush to the surface, and the drums smash at your fingers. “Intrinsically destroying everything, elaborately portraying martyrdom,” Bennett stabs as the tornadic assault ends abruptly and shockingly. “Endless Empty Shapes” brings with it deep growls delivered from the guts as the playing mars, and the words are spat out as if they’re sickening Bennett. The playing starts landing blows heavily and recklessly, stampeding with crazed desire, tearing away at guts and splattering blood. The title track ends the proceedings, kicking in with Bennett snarling, “Ignorant herds, weeping with false faith, led to their blind ways,” attacking with bloodlust right from the start. The drums unleash war while vicious growls lay waste, as hammers are continually wielded and allowed to leave gaping wounds in whatever they encounter. That intensity never relents as the playing continues to dole out punishment until everything finally comes to a merciful finish.

Barghest’s savagery and chaotic appetite for hellish ways arise again on “Altars of Rot,” another record in which they refuse to pull back musically and lyrically. This record is a beast that flies by in no time but makes sure you feel every ounce of the punishment along the way. There’s zero mercy to be had at this band’s hands, a lesson we’ve learned over and over during the past decade and a half of their reign.

For more on the band, go here: https://www.facebook.com/barghestsoulless