One does not actually have to play metal for a living to be metal. Sure, maybe the music doesn’t sound like metal coming from some artists, but the uncompromising ethos, the passion, and the brutality, even if not by decibels, can be felt from these people, making them more genuine, more meaningful, more, well, metal than some of the people who claim to make contributions to the genre.

That’s the idea behind our Outer Edges feature, which we bring you from time to time, to give you a look at artists you won’t find in the metal bin at your local record store (here’s hoping you still have one) but that may still grab a hold of you and move you the way a thrash, death or black metal band could. Crossover appeal, they call it, and the two albums we will discuss today feature artists that have had some dabblings in metal, but their music is far from that sound.

First up is Chelsea Wolfe, one of the most arresting artists I’ve come across in a few years. When I first read about her, she was described as playing doom folk, and there’s something to that, and that her attitude and philosophy was closer to black metal as some of the young upstarts playing it today. It also helped that she tackled and totally mastered and reimagined the Burzum song “Black Spell of Destruction,” video of which you can find below. She also has a dark, dark image for such a pretty California girl. I’m sure she’d roll her eyes at that, but you get what I mean. Her darkness is key to her, and while many other musicians who tend to explore dark roads seem to want their photos in magazines as much as they want their songs heard, you can tell the music is priority No. 1 to Wolfe.

Her second full-length effort “Ἀποκάλυψις” (pronounced apokalypsis and Greek for both apocalypse and revelation) is the finest non-metal album I’ve heard this year. It is absolutely enrapturing, and every time I listen to the record, I find myself in something of a daydream. That makes sense since her music, while folk at heart, does have a lot of trance-like qualities to it, and she achieves noise-scapes that sound like they were culled from lucid dreams. But she’s not just here to freak you out, but also to move you, as her haunting, unforgettable melodies will do easily. Her gorgeous voice can sounds somber, frightened, frightening, and otherworldly, depending on her mood. She’s someone you can’t help but give all your attention. She gives you no other choice.  I can’t say enough about Wolfe, and if she’s not mentioned in the same breath with other super-hyped indie artists such as The National, St. Vincent, My Brightest Diamond and Dirty Projectors, it means your bloggers aren’t really paying attention and just have an agenda to serve. Well, ha, of course they do.

If you had the pleasure of hearing or owning Wolfe’s 2010 release “The Grime and the Glow,” then you’ll recognize a couple of cuts on 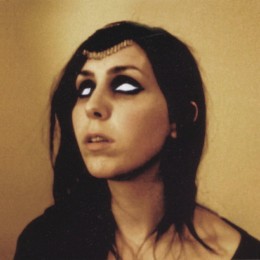 here. “Moses” is reworked, this time with a gloomier melody as its spine and with extra damaged guitar, and “Demons” is a grainier, scarier version of “Bounce House Demons,” which is a song that may make you want to dance and lash out equally. Plus, good luck removing the chorus from your brain. Wolfe had benefit of an actual studio on this record, as opposed to doing her debut on her own, so she was able to breathe new life into these tracks. “Mer” is an awesome, abrasive folk song, packed with weird noises and echoey voices; “Tracks (Tall Bodies)” has a seductive, late-night-friendly melody that reminds me of Stevie Nick’s early work; “The Wasteland” is a pushy, electronic-style song that also spits warmth; “Pale on Pale” is bluesy, spooky and trippy, and it’s my favorite track on here; while ghoulish closer “Movie Screen” is a slow, noisy howl of a song, with Wolfe unleashing primal shrieks as it fades to black.

All of Wolfe’s music comes highly recommended, and trust me, you won’t hear anything else like her anywhere else. Also, put on the bloodiest, goriest black metal album you got this year and match it up with “Ἀποκάλυψις” and see who scares you more. My guess is Wolfe.

For more on the label, go here: http://pendusound.com/

If you question whether Jesse Sykes and the Sweet Hereafter’s psychedelic-laced, moody, sometimes country-fed music can be seen as metal philosophically, ask yourself this: Would Southern Lord sell the vinyl version of her last record is they weren’t? Answer is no. And with the arrival of the band’s fourth full-length effort, first under the Station Grey Records/Thirty Tigers banner (her last was on rock-solid Polyvinyl), we hear a more muscle-bound, aggressive band than we’ve gotten before. And it’s pretty damn awesome to experience.

For those unaware, Sykes lent her mournful, sometimes gravely, always distinctive voice to the Sunn 0)))/Boris collaborative album “Altar” on the song “The Sinking Belle (Blue Sheep),” the standout track on that effort (see below).

Furthermore, she’s played live with the bands, and her own music, while beautiful and delicate in spots, also has an unapologetic, scarred-heart-on-sleeve approach that make her one of the most willing, blood-shedding artists in the singer-songwriter genre. Her powerful band gives her even more strength, and do they ever make their presence known on “Marble Son,” a record that thematically has Sykes looking back at things she perhaps didn’t appreciate when she was younger but now embraces with a greater understanding. And vice versa. 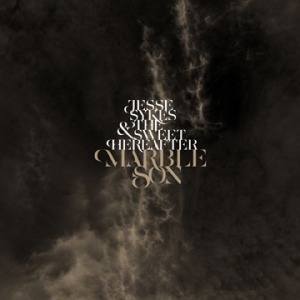 The record rips open with the eight-minute “Hushed By Devotion,” a loud, swelling, guitar-rich psychedelic rocker that’s got both a hippie vibe and a sinister smirk. “Come to Mary” is quite a different song for the band, as Sykes lets her voice blend in with her bandmates’, as she only takes full control on the chorus; “Servant of Your Vision” is a tasty slice of Midwestern rock that reminds me a lot of Magnolia Electric Co. (one of my favorite bands, by the way); “Pleasuring the Divine” is an out-and-out smoky smasher, the pushiest song on the entire record; and “Your Own Kind” has a ’60s lovelorn-advice approach, but it’s dressed with buzzing guitar work and a total electric dust storm that makes you want to assault a potted plant. Yet the band has its contemplative moments, found on the lovely, gently plucked title cut, where Sykes admits, “I wish I’d found you beautiful before”; the dark reflection of “Be It Me or Be It None”; and the blended harmonies of “Birds of Passerine.”

Sykes’ voice, like Wolfe’s, is one that commands you to take heed. Her words are not to be missed, and her delivery, while sometimes laid back and seemingly sleepy, always bites hard.  Each of the band’s albums stands on its own, and “The Marble Son” arguably is their best one yet. It’s certainly the one that’ll challenge your speakers the most, and on nights when you just want to reflect and ice your troubles, Sykes and the Sweet hereafter will get you there every time.

For more on the band, go here: http://www.jessesykes.com/