Not sure how many of you are old enough to remember this, or depending on where you live if you ever even saw this, but there used to be an ad for Reese’s Peanut Butter Cups where one person was walking around with an exposed chocolate bar, another person with an open can of peanut butter. They smash into each other, smearing their respective treats together, and after some terse words, they realize they accidentally invented an incredible new snack. Then the H.B. Reese Candy Co. came along and stole the idea like bloody corporate thieves in the night. Damn suits!

That old commercial jumped into my head when I got down to tackling “Tales of Wanderings,” the debut from Old Silver Key, a band made up of the four members of Ukraine folk-black metal band Drudkh and French artist Neige (Alcest, Forgotten Woods, Lantlôs, among many others). No, the music isn’t like a sugary confection that’ll stick to the roof of your mouth, but it does combine two of my favorite black metal flavors. The only question was, before listening to the thing, would this be a meeting of the middle for the two parties, or would it lean more heavily toward Drudkh’s (or their other project Blood of Kingu’s) thunder or Neige’s lush beauty. Turns out it’s more like the latter, though if you go back and listen to “Handful of Stars,” Drudkh’s most recent record, you hear the footsteps turning down this path. 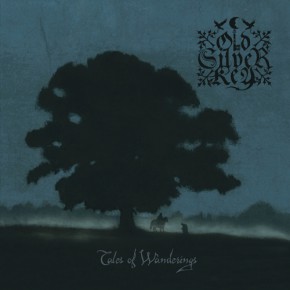 The music on the band’s first, and hopefully not last, album is awash in shoegaze and post-rock influences, and it really doesn’t flaunt many of the combined artists’ black metal resumes. And that’s all well and good, because we get to hear a different side of the Drudkh members’ abilities, and it makes for a perfect setting for Neige’s delicate croon to add more emotion and sensitivity. If you were hoping for darkness and thunder, you’re only getting one of those things because it’s a record that’s barely heavy at all, save for the opening to “Nineteen Winters Far Away from Home.” But yeah, it’s murky, and the music makes me think of fog-marred mornings and rain-filled nights. It’s incredibly moody, and the music is infectious and very listenable. Ever since I got the promo, I’ve listened dozens of times, which doesn’t always happen considering how much new music I hear per week.

Another element that matches Neige’s presence is Drudkh mastermind Roman Sayenko’s adventure into fantastical elements on “Tales of Wanderings.” Neige’s music in Alcest focuses on a make-believe, dreamlike world from which he draws inspiration, and on here, Sayenko leaps full-bore into a realm of “witches, cunning foxes, talking wolves, where the poor farmer’s boy wins the hand of a princess while the prince sulks as a frog.” At least that’s how it’s described in the bio materials for the record. It’s an adventure back into childhood imagination, where the impossible is possible, and sitting by your windowsill dreaming is the way you pass your days. Doesn’t sound very metal, does it? Well, broaden your mind and take a trip with the music if you don’t think so. It sounds exactly like how it’s described, and it’s a true escape, especially when your real life has you beaten into the ground.

The record opens with a quiet, delicate instrumental “What Once Was and Never Will Happen Again,” a fairly dissonant number that floats right into “November Night Insomnia,” a dark rock song where Neige sounds angelic and the music achieves a frosty tone. “Cold Spring” has an uptempo shoegaze approach, with Neige’s singing taking on a lower register, something you don’t often hear from him, while “Star Catcher” has some indie rock and European folk underpinnings, and “Burnt Letters” is a rich, steadily driving song that also should sound great once snow starts falling here on the East Coast. This all sets up the eight-minute closing ballad “About Which An Old House Dreams,” where Neige is at his absolute finest, pouring every bit of his heart into this emotional song, as the rest of the band follows up with mellow keyboards, calculated drumming, some barbs here and there, and epically soaring guitar work. It’s the final salvo of a band leaving every bit of themselves in a piece of work, and when you hear the tape machine give out at the end, you know it’s time to close the book for now. It’s a stunning adventure.

Sometimes dream collaborations such as these don’t work out for the best (have you heard any of the Lou Reed/Metallica stuff? Hideous …), but this band really delivers. It suits Neige’s imagination and abilities perfectly, and for those open-minded Drudkh fans who also can get with bands such as Anathema, My Dying Bride and other dark shadows, you should find plenty of enjoyment in these yarns. Every time I hear it, I get lost in it, and “Tales of Wanderings” is one of the most moving, picturesque albums to come along this year. It’s the best of both worlds, the chocolate in your peanut butter, and it satisfies those pangs of wonder you haven’t felt since you were a child.

For more on the band, go here: http://www.season-of-mist.com/bands/old-silver-key

For more on the label, go here: http://e-shop.season-of-mist.com/en