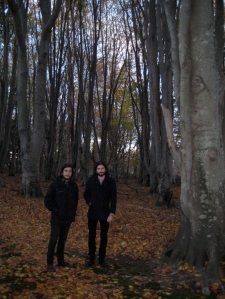 Everyone who knows me well is aware of what kind of year I’m having. It’s been one for the books as far as terrible years are concerned, and it’s only September. But what are you to do? Some things are just out of your control, and you try to live around these matters, no matter how evasive they can be from time to time. We all go there now and again, don’t we?

Many people, when having bad years, weeks, days, whatever, often turn to things for solace or distraction or just to take their minds out of the tank. That could be a book, a walk, cooking up some elaborate dish, talking to a friend, or listening to music. I tend, when going through a particularly tumultuous time, not to lean toward music containing vocals. Let me explain that. See, I want the distraction, but I don’t want words associated with what I’m hearing sometimes because I don’t want that heavy of an emotional connection. I’m thinking enough as it is, and no matter how innocent a line may be, it can drive my mind crazy if it, through no fault of its own, gets associated with something in my head. It’s hard to explain, but a lot of times when I’ve gone through particularly bad moments, songs or albums have taken on a negative connotation because of what I was experiencing at the time. The words got connected to my experiences. Instrumental music, however, seems to flow with me fine, and while the melodies may trigger emotions, for the most part it soothes rather than hurts me.

So I’ve been listening a lot to the new album from Barn Owl, an instrumental duo we’ve discussed before who just offered up their new record “Lost in the Glare” for Thrill Jockey, which follows this year’s mini-release “Shadowland” and 2010’s “Ancestral Star,” which was their first for the label. There’s something reassuring and serene about the songs Evan Caminiti and Jon Porras created for this album, a sort of pathway for concentration and healing that’s created by what these guys do on guitar and keyboard. Typically, when listening to “Lost in the Glare,” I can breathe and sort out what’s in my mind. The chaos seems less disruptive, reality unravels itself a little more succinctly, and while the problems don’t go away, the record allows me that space to work through the fog. I’ve often felt the same way about their other recordings, but this one is on another level, another plane, and for the multi-pronged badness of this year, it’s been one of my go-to escape routes. It’s great for reading, by the way. I know that might sound like I’m calling it background music, but it’s anything but that. Because it stimulates my mind and generally sets me at ease, I find I can absorb what I’m reading better in its presence.

There’s another thing I really love about “Lost in the Glare,” and it strikes about halfway through the album. “Pale Star,” “Turiya” and “Devotion I” all have that beauty, calmness and psychedelic exploration I appreciate so much, without sounding hokey, but once “The Darkness Night Since 1863” strikes, the shit just hits the fan. It’s a smoky, droning, doom-laden cut that hulks and bubbles up like Sunn 0))) or Khanate (minus the manic shrieks), and, for me, it’s been that part of the journey that lets my anger and frustration erupt. It’s OK, when going through a rough stretch, to be furious. You can’t control everything, and why not? That’s amazingly frustrating. It makes me want to pound my hands against granite, but all that’ll cause are broken knuckles and more issues. So this burner is a release and is the most metal composition they’ve ever conjured. And once it’s over, things settle down again. It’s like a cooling-off period, but a richly rewarding one. “Temple of the Winds” has a touch of ’70s acoustic folk, cosmic blips and Western strumming, while “Light Echoes” sits in hypnotic noise drone and eerie melody and closer “Devotion II” opens at ease before turning up the volume and emotion for one hell of an outpouring. It’s the perfect curtain closer for this incredible piece, which is Barn Owl’s best yet.

The guys also used some special techniques to create the rich, organic, spacious sounds of this record, but as I’ve long said, I tend to concentrate less on that stuff and go more for how the music makes me feel. I did include a link below if you’re interested and reading more about their recording approach, as that piece will explain it far better than I ever could. For me, this has allowed me to lapse into daydream, figure out ways to get through the issues of the day with humility and calm, or simply open up my mind so I can see things for what they are. “Lost in the Glare” is a record that, funny enough, is helping me find my way through the darkness, if only a little bit at a time. If you’re having a better year than I and just want to dissolve into a great piece of instrumental art, you’ll find this the perfect setting for such a venture.

For more on the band, go here: http://www.electrictotem.com/

For more on how Barn Owl achieved the sound on this album, go here: http://www.thrilljockey.com/artists/index.html?id=12625

For more on the label, go here: http://www.thrilljockey.com/

Boston’s Revocation seemed to be on the path to becoming one of modern metal’s most interesting and intricate bands going, and their powerful sophomore album “Existence Is Futile” seemed to be evidence to support that assumption.

That record had really strong guitar work, courtesy of David Davidson and Dan Gargiulo, which could even please prog metal fans, and vocally, it was aggressive enough to grab those in the melodic death and thrash camps. Plus, the band’s profile rose, and magazines that typically don’t do much on metal, such as Spin, even paid honor to the young, up-and-coming bands. Now that their third record “Chaos of Forms” has arrived, it would seem time to build on that reputation and prove they plan to grab extreme metal’s reins with utmost force.

But, at least as far as I’m concerned, that doesn’t happen. The record is one of the biggest disappointments of this year, and while I don’t generally listen to the type of music Revocation makes, I liked their last one enough to be excited to hear this one. There are exceptions with every genre, even ones you typically don’t visit, and I found Revocation to be one of those bands before. Instead of progressing positively, they followed the path of another young metal band that, at one time, seemed to have the potential to become a world beater and instead became a mundane, character-free metalcore group that isn’t challenging anyone. Revocation seem to be doing the same thing, and the fact they sound like that unnamed (at least here) band now makes me worry that instead of these guys being top challengers, they’ll be satisfied with just moving some records and that’s all. And I’m assuming that, so I could be wrong, but I’m not excited about this album, and I worry they’re going down a path on which they never should have tread.

My review is live now at Lambgoat, a link to which you can find below. There you can find, in greater detail, why I feel the way I do about Chaos of Forms,” and you can find out the afore-not-mentioned metalcore band with which I’m grouping Revocation. Also, I should point out this record has gotten a lot of favorable reviews elsewhere,  so go try to find some of those, too, before you make up your mind. This is just one view, after all.

For more on the band, go here: http://www.facebook.com/Revocation