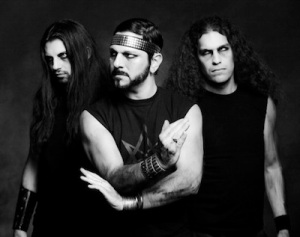 As seriously as I take the entire heavy metal genre, I’ve always willingly admitted that some of it is really funny. For example, a couple years ago my wife (non-metal fan) and I went to see Sunn 0))), and when Attila Csihar came out dressed as a tree, my better half lost her mind laughing. I completely understood her reaction, even though I thought the performance was mesmerizing and kind of scary. But yeah, I can see how it’s also humorous. All depends on who is processing the scene.

I even have found myself chuckling at some of the histrionics and dramatics unleashed by some of my favorite bands, such as Iron Maiden, Helloween, and Slayer, because sometimes what they do is delivered so seriously and earnestly, you can’t help but laugh a little bit. Any time I chuckle at bands I like, it’s always with affection. It’s OK to find something you like also tickles you from time to time. It’s something that’s always made Absu appeal to me, be it their image, their over-the-top sound, or drummer/vocalist Prescriptor McGovern’s between-song banter live, where he never dials down the high-pitched shriek he employs in his vocals when he’s merely talking. I love it. I laugh, yes, but not because I’m making fun. It makes me happy that it’s so ridiculous.

Actually, King Diamond is an artist I can closely associate with Absu. I love his records, his ambition, his imagination, but never is the line, “Grandma, welcome home! You have been gone for so long,” not funny to hear or to sing back myself. Much of Absu’s catalog hits me the same way. I love their music, and their new disc “Abzu” is another that I’ve thoroughly enjoyed from front to back. But I know if I play it for my wife, she’ll chuckle at a lot of this, especially the banshee shrieks that greet you on opener “Earth Ripper.” I think I may have experienced that song vicariously through her the first time I heard it, because even I smirked when hearing McGovern just go off. It’s pure heavy metal bliss, something you can hear as loud as possible emanating from your stereo and, when your guts are strong, you can wail back in your living room. Absu’s formulas is one of those that reminds me of why I fell in love with metal music in the first place.

The band’s new record is the second in a trilogy that kicked on with their last album, a self-titled opus that was released in 2009. It’s nice we’re getting a new record from this Texas-based band so soon because when they returned in 2009, it was their first fresh album since 2001’s “Tara.” But apparently they have stories they must tell urgently, and this album delves even deeper into Thelemic realms and Crowley-based occultism and magick that they dug open on their last opus. Of course, unless you have a lyric sheet in front of you, and I do not as of this writing because I don’t yet have the physical product, it’s hard to process what McGovern and his mates – guitarist Vis Crom and bassist/vocalist Ezezu – are trying to say on these songs. Instead, you have to get caught up in the spirit of the music, which it’s fairly easy to accomplish when listening to “Abzu.”

Absu’s dramatic, pulverizing black metal also has some thrash and prog elements to it, which gives their material some variety. Of course, you also have McGovern (who handles main vocals) growling and shrieking over the stuff, adding his unique character and charisma to their music, all the while handling a mind-blowing pace on drums. Having witnessed him live, I can’t believe he performs both so effectively, but he does! As noted, “Earth Ripper” is way over the top but also a pretty awesome display; “Circles of the Oath” begins to subtly spill some mystical elements into the album, with synth lines lying underneath the chaos; “Skrying in the Spirit Vision” reaches back into more traditional death metal, with growling that sounds more gurgly; and the six-part, 14-minute movement “A Song for Ea,” shifts to its individual building blocks methodically, each sounding different from each other, so you can tell when you’ve gone from piece to piece, and the acoustic, eerie whirring that sets up the song’s thunderous conclusion will make your skin crawl. There’s something about their music that’s blended into the sound that makes you feel that magick, that strange mysticism. It’s why I feel bad just calling this a black metal album, because there’s so much more lurking beneath, and it really raises up your mind when you hear it. You almost can envision the band’s transformation as they play these songs.

All in all, this is a great, spacious, experimental, thought-provoking piece of black metal that pays homage to a world that many don’t understand or even realize exists. It may take some studying even once you do have the lyric sheet to grasp what’s happening, and I had to do a lot of reading before even writing a rudimentary review of “Abzu.” So get ready to learn something if you’re not already well-schooled in Crowley’s ideas and teachings. If you don’t care about any of this, just get lost in the record, because it’s a fascinating listen that, yes, may make you grin from time to time because it all sounds so damn serious. Or maybe McGovern even has a bit of his tongue in his cheek as well. Who’s to say? Bottom line, however, is this is a kick ass album that should go over great live. I’m excited about seeing the band again, partially to hear the new songs in that setting, but also to hear McGovern shriek like a vulture from his stool.

For more on the band, go here: http://absu.bandzoogle.com/home.cfm

For more on the label, go here: http://candlelightrecordsusa.com/site/