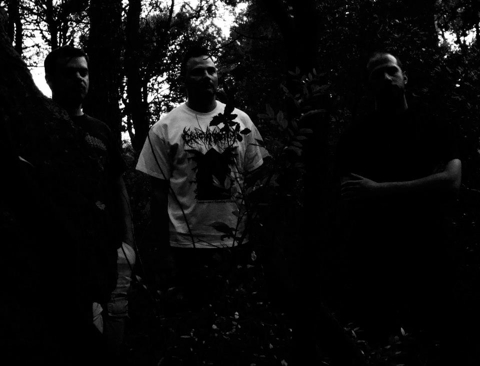 Putting on a record and immediately, and perhaps even loudly, wondering, “What the hell is going on here?” isn’t something that happens all the time. A major reason for that is not enough bands are bold enough to take chances anymore, and another is so many artists play it close to the vest and don’t want to do something that might aggravate a listener.

I don’t think metallic wackos Dephosphorus even have a word that means “safe” in the universe from which they hail. Oh sure, they claim Athens, Greece, as their hometown, but that’s got to be a front. No band that claims their style as “astrogrind” and that have a record as damaging and as warped as their second effort “Ravenous Solemnity” can possibly be drawing oxygen through human lungs. Or maybe I’m just buying into the whole thing because it’s so damn convincing. Either way, this band actually has come up with something fresh in a world that has seen and heard every idea already. I mean, OK, they’re not reinventing music or anything. They still adhere to grindcore, death, black, and doom metal, but they combine it all in a way that works so great, you wonder if they really are operating on a level above what we humans can comprehend. And if that’s the case, please send more bands like you. It’ll make a scribe’s job a hell of a lot easier.

Above how interesting their amalgamation of sounds happens to be on “Ravenous Solemnity,” their follow-up to 2012’s “Night Sky Transform,” and how well the band gels and carries out these ambitious ideas, there’s a crazy person howling over top of all of this who will cause you to drop what you’re doing and tilt your head. The closest comparison I can make to who vocalist Panos Agoros sounds like is Lemongrab from “Adventure Time,” and I don’t mean that as an insult. He happens to be one of my favorite cartoon characters going. Agoros has that same unbridled rage, high-pitched shrieking unreasonableness, and a way about how he delivers what he’s saying that you wonder if his eyes are bulging out and he’s reaching for your neck. But we also need to pay respect to the other folks supplying this insanity, including guitarist Thanos Mantas and new drummer John Votsis (Dodsferd, Ravencult, etc.) who joined the fold in 2013. These guys are really onto something, and this record is one that, even if it gnaws on your nerves a bit (I love the thing, but I can understand how it could grate some), you’re never going to be anything but morbidly and wholly invested and interested.

“Reversed Into Contraction” opens the record with proggy death metal, those crazed shrieks I mentioned (they are just inhuman, which fits the idea, no?), and a sense of morbid adventure, and that works into “There Is a Color,” with more harsh vocals, a punk flavor to the riffs, and eventually a violent, chewy section of grind that takes the song out. “Ancient Drone” has more frenetic riffing that blows up into a fury, only to run headlong into a murky cloud of doom metal, and “Dark on Dark” is propulsive, fast, and punishing, getting in and out quickly but definitely making its point. “Astrocyte Portal” is a weird one and is one of the most alien-style tracks on this record, as it has its violence, yes, but it really peaks in its final moments when the music evens out, drone rises, and detached, clean vocals emerge, warbling and creating a nightmare state. “Storming the Sloan Wall” has a nice infusion of hardcore-tinged violence, but it also has its share of meaty riffs, strong melodies, and drums that crush, while “False Vacuum” is unhinged, with near blast beats, insane vocals, and outright chaos.

The title track settles into a doomy, filthy groove, playing more on sludge and muddiness, which is a nice change of pace, and that leads into “Towards the Cold, Mysterious Infinity” that has a mystical, chilling start before it blows up in your face and rages. “Hammer of Logic” has more powerful guitar work, crazed grindcore storming, and eventually a slow, weirded-out ending, followed by “A Fountain of Daggers” that’s packed with eerie prog death, raspy shrieks, and strange voices calling out from the darkness. “Buried Alive in Obsolescence” has a Krallice feel at the beginning, with a strange, science lab black metal atmpsphere that eventually melts into punishing thrash and grind. This is a great example of how this band can pull together so many diverse elements and make them seem as if they always belonged together. “Glorification of the Anti-Life Equation” is blistering and strange, with tricky guitar playing, some infernal wildness, and eventually a slowdown that gets airy and, dare I say, introspective. The record closes with “Vicious Infinite Regress,” that kind of pulls everything back together again and gives one last blast of what these guys do so well, from punchy, pushy tempos, to maniacal shrieks, to rough speed thrash that could get you blasted in the mouth. Great finish to a record that always keeps you wondering what explosive pocket of stars they’ll explore next.

Dephosphorus sure make outer space and grinding through the cosmos a pretty damn good time, and they certainly seem like a band that is capable of just about anything. They do so many things so well, and they always figure out a way to make all of those volatile parts work together. “Ravenous Solemnity” is a mind-blower of a record that proves this band fears no borders or lands unexplored, and once they get there and plant their flag in those regions, they are going to dominate everything.

For more on the band, go here: http://dephosphorus.com/