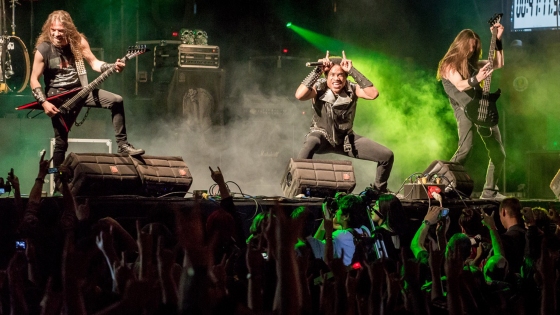 To carve out a long, meaningful career in thrash metal, one has to be a survivor. Think about some of the thrash bands out there that have been toiling in hardship, covering their elbows in grease, and pounding the pavement just to get their band and their music out to the people. Unless you’re Metallica, Anthrax, or Slayer, that’s not easy task.

But there have been some great underground thrash bands that have had their levels of success but aren’t household names like the ones mentioned above. I’m talking about groups like Destruction, Exodus, Overkill, Forbidden, and Onslaught that refused to give up on their dreams and their passion for playing thrash metal, and they helped lay the foundation for the newer bands out there who are trying to live up to their histories. Another band you can add to that list is California thrashers Hirax, whose frontman Katon W. De Pena is the dictionary definition as a survivor in this form of music, and who keep going strong three decades after formation. 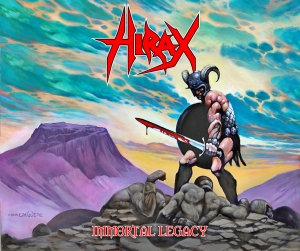 Hirax’s run also has been one that’s had its ups and downs, with a long layoff that essentially took them out of the 1990s (which really wasn’t a thrash golden era anyway), and they only have five full-length records on their resume. Hirax got started in 1982, with their first record “Raging Violence” arriving three years later by way of Metal Blade. They followed up with a 16-minute sophomore effort “Hate, Fear, and Power” in 1986, and only a few years later, they would go on hiatus. The band was revived in 2000, with two EPs leading up to their third full-length “The New Age of Terror,” with the irreplaceable De Pena remaining as the only member from the band’s first era, but that certainly didn’t do anything to curb the band’s intensity. A few more EPs followed, then in 2009, we got their fourth full-length “El Rostro de la Muerte.” The band kept rolling live, building up their audience, pushing out the thrash goodness, and offering up a rock-solid compilation “Noise Chaos War,” a series of splits and singles, and now finally their fifth LP “Immortal Legacy” that should only solidify their standing.

If you’ve been into Hirax during their entire run, this new record will be right up your alley. De Pena sounds as awesome and in command as ever before, with his unique vocals that pay homage to both thrash and power metal, and having him in front of this band is all that matters. But that’s not to take away from his bandmates, who certainly bring it hard on this record, including guitarists Lance Harrison and Mike Guerrero (who joined the fold in 2011), bassist Steve Harrison, and drummer Jorge Iacobellis. They’ve also been working hard and non-stop to bring Hirax to more people, and to enhance the band’s efforts on this record, they brought in noted axe men Rocky George (Suicidal Tendencies, Fishbone), Juan Garcia (Agent Steel, Abattoir), and Jim Durkin (Dark Angel, Dreams of Damnation) to add their expert lead work and make “Immortal Legacy” an even stronger record. As a longtime devotee to the thrash era of the 1980s, in which I grew up, this record is a total blast of fun and puts a giant smile on my face.

“Black Smoke” begins with a tape speeding up, bombs detonating, and the band kicking you right in the ass with their power. The chorus is a killer based on De Pena’s charisma and delivery, and the sirens that ring out make it sound like all hell is breaking loose. “Hellion Rising” begins with just singing that leads into a massive thrash assault that absolutely trucks, visions of the coming apocalypse, and more rock-solid guitar work that is a staple of this record. “Victims of the Dead” has a massive tempo that positively kills, with De Pena howling, “Release the victims of the dead!” and more tremendous soloing, which isn’t exactly a surprise. “Thunder Roar, the Conquest, la Boca de la Bestia – The Mouth of the Beast” sure is a hell of a mouthful of a title, and it opens with some classic metallic guitar work before the thrash erupts. De Pena is awesome on this track, with him observing, “The overlord rises on wings of steel,” and the rest of the band just sets fire to everything and lets it burn gloriously. “Earthshaker” is a cool guitar-centric interlude that rolls into “Tied to the Gallows Pole,” where engines roar, melodies capture you, and De Pena singing about iron fists and beating back the opposition.

“Deceiver” has a riffy intro, total punishment, and screamier, more high-pitched vocals that is one of De Pena’s staples. Seriously, the guy has been at this so long, and his voice sounds as strong as ever before. The title track is a perfect anthem for the band at this point, and the vocals really sell the hell out of this thing. “S.O.W.” is a short interlude piece that feeds into “Violence of Action” that is fast and aggressive, with De Pena urging attack and “engage the enemy,” as the rest of the band fills the space with smoking chaos, great guitar work, and constant hammering. “Atlantis (Journey to Atlantis)” is a cool bass-led instrumental that gives way to the explosive finale “The World Will Burn,” with guitars erupting and surging brightly. De Pena gives his final calls, with the rest of the band shouting “Suffer the World!” over the tumultuous chorus. Now, if you get the vinyl or digital version of this record, you get another track. But my promo ends here, so that last one will remain a mystery for now. I’ll be seeking it out for sure.

Hirax always deserved to be mentioned in the same breath as bands like Testament, Nuclear Assault, Anthrax, and Megadeth, and it’s a tribute to their toughness, hearts, and desire to keep hammering audiences. And here they remain making great records in 2014. “Immortal Legacy” hopefully can be a literal thing for Hirax, a record that can get more people aware of what these guys do so well and more cognizant of their thunderous history. This band deserves to be in more homes, in more ears, and always be mentioned any time the great thrash bands of all time are discussed. Because they are one.

For more on the band, go here: http://www.blackdevilrecords.com/

For more on the label, go here: http://www.spv.de/