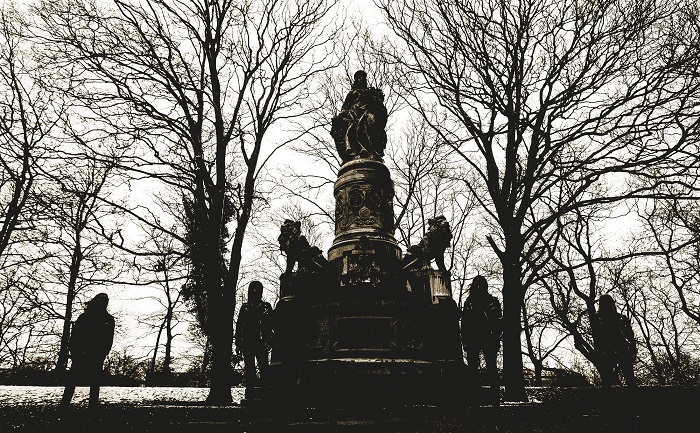 Several weeks ago, we talked about Danish death metal squadron Taphos, who had two of their demo recordings reissued by Blood Harvest in anticipation of a full-length debut record that was promised to follow. It really didn’t take long for that full platter to arrive, and now we have the answer to what the band could do with a complete recording.

It only took an initial visit with “Come Ethereal Somberness” to answer those questions, and the reaction was absolutely bloody positive. Every visit since has gotten even more immersive. The nine-track, nearly 36-minute record is destructive and absolutely pays off the promise they showed on their earlier work. The record is ideally served with no bloat and only razor-sharp playing and riffs that kill. The band— vocalist/bassist H, guitarists M and D, and drummer U—thrives in their death metal setting, proving to be, like Tomb Mold who we discussed yesterday, a filthy beacon in this sub-genre’s often littered terrain, where so many just think being brutal will get you by. Not so. It takes substance and power unlike most to truly make a mark, and Taphos are doing just that with this blood-curdling record that you should make it a point to hear. 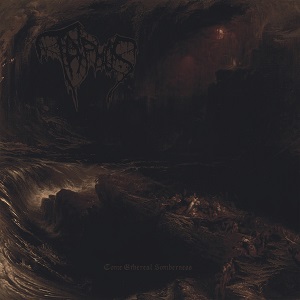 “Letum” is a quick instrumental bookend that starts the record, as a monstrous haze builds, and hellish winds collect, pushing into “Impending Peril” that lights things on fire and prevents its extinguishment. The leads burn, while the growls spew acid, and it’s total demolition from there. The guitar work kicks up mud, as the punishment is fully meted out, and everything ends with eerie voices speaking and the guitars scraping away. “Thrive in Upheaval” is savage and relentless, with animalistic growls and fire-breathing guitars. The bass weaves in and out of traffic, the soloing scorches, and everything comes to a vicious end. “Ocular Blackness” has guitars swirling before we head into grinding madness. The growls are gnarly, while the guitars send blinding flashes, all the while the disorienting pace makes it necessary to clutch the wall to break your fall.

“A Manifest of Trepidation” trudges in the blood and muck, leaving sticky boot prints, and then growls pierce the surface as the song is blown to bits. Guitars hang in the air while the tempo changes violently, as speed and ridiculous bends take you for a sickening ride. The bass recoils, the guitars deliver jolts, and everything bleeds into the dirt. “Dysfori” is an instrumental piece that lets you catch your breath but leaves you haunted. Whispers work their way into the mix, while hazy acoustics give off a classic metal feel, heading right into “Insidious Gyres.” There, a molten assault and belched growls turn your stomach, while the guitars twist and tumble, with the soloing going off the rails. The track is hypnotizing and fast, with the bass swinging for your face, the soloing feeling like a thick insect swarm, with everything soaring right into the sun. “Livores” crushes teeth with a grimy, heavy attack, as the leads stretch and leave a burnt stench behind, and the drums flatten rock and bones. The song spends most of its time eroding your flesh, but then things cool off, and the final seconds leave you numb and disoriented. The back end of the instrumental bookend “Obitum” closes the journey with thick noise, squeaking acoustics, dreamy echoes, and the drums boring into your brain.

Now that we know Taphos are the real deal and not just a band with killer demos, we can spread the word about their infamy and violent undertakings that we meet on “Come Ethereal Somberness.” The band still is operating somewhat in a shroud of mystery, and there are plenty more eyes and ears to open as they go forward. But they have the goods, they prove their death meddle, and they’ll be expected to be one of the unquestioned leaders shaping this sound moving into the future.

For more on the band, go here: https://www.facebook.com/taphosdeath/