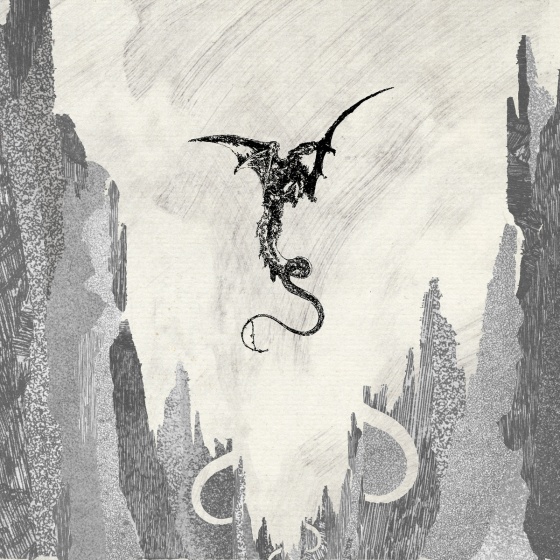 Take two important cogs out of any good band, and you likely have chaos. Sure, you can replace said parts with newer players who maybe bring something entirely different to the table, but really, things are never the same ever again. Or, imagine the remaining members carrying on without any new members and morphing into something different. Sounds a little risky?

OK, that’s not exactly what we have going on here today, and I’m just playing around. Blame my head being full of thick liquid and mind-erasing cold medicine, but it’s what I was thinking about when listening to the debut release from Geryon over and over the past few days. Great medicine head music, by the way. But what this band is is Krallice divided in half, with no guitar players. Yes, what we have left is bassist/vocalist Nicholas McMaster and drummer Lev Weinstein on their own, a bass-and-drums combo playing senses-defying death metal that flies in the face of sanity and convention. Now, keep in the mind the idea of removing the guitars away from Krallice would be a silly idea, and again, that’s not what’s really going on here since they aren’t doing the same things musically. But that might be the perception from afar, and if that’s what’s in your head, ignore that and go into this four-track release with an open mind. If you do, you will be swept away by one of the most interesting metal releases of the year so far.

Both McMaster and Weinstein not only have plied their trade pushing Krallice into the forefront of the era’s most intriguing, thought-provoking, and pioneering black metal bands in America, but they’ve also played together in other bands such as doom monsters Bloody Panda and progressive death group Astomatous, and clearly they are comfortable working together and pushing each other creatively. Geryon is as strong and fun a project as anything they’ve done together, Krallice included, and this is a project I’d love to hear from in the future. By the way, this album was available digitally last year, with Gilead Media stepping up with the vinyl version of this record that’s up for pre-order now. I’m thinking that’s the best way to experience this mammoth.

The album starts off with “De Profundis,” a song that rumbles open, with super flexible bass lines popping all over, the drums lacing and pounding, and McMaster’s harsh growls pushing through the murk and madness. There’s a strong sci-fi connection to this song, with really interesting, bubbling melodies in which you cannot help but get caught up, and the song ends in static sizzle and angelic glory. “Birth” follows with buzzing basslines that rollick hard, progressive melodies, and twist and turns musically you’ll never see coming. There’s a lot of twists and sudden turns, with the guys always churning and flattening you. McMaster sounds like a monster vocally yet again, and the song fizzles out in a bed of noise.

“Lament” kicks off the second half of the record with a burst of speed, with the guys going all over the place to stretch their sound and find new ways to sound innovative and bizarre, before they slip back into the mindset of drubbing you with fury and violence. Beds of noise rise and fall, some keyboards slip into the scene and fill the place with fog, and there’s an alien-like pulsation that permeates the song and, yeah, totally jibes with the medicine head idea mentioned earlier. “To the Silenced” is the finale, complete with a punishing open that could draw blood, cosmic zapping, and a calculated bashing that is powered by Weinstein’s drumming. The song keeps transforming over its eight-minute running time, sometimes slipping into slower driving tempos, but always returning to blister you again when you have lowered your defenses. The song has a fittingly frozen, spacey ending that, if you’ve fully connected, should allow you to float off into the unknown with the band, exploring places you’ve never been before. At least in your mind.

This is one hell of an interesting, fun record, and Geryon could have a real big future as one of metal’s most stimulating projects. Yeah, the Krallice connection is hard to avoid, but this band is a totally different animal altogether. It’s not as easy as my intro made it sound, the rhythm section carrying on without the guitarists. This is a brand new beast, one with a completely different agenda, and an effort that easily should capture the imagination of metal’s most ambitious listeners. Go out of your way to hear this record.

For more on the band, go here: https://www.facebook.com/geryondm